When the Real Tragedy is Not in the Act 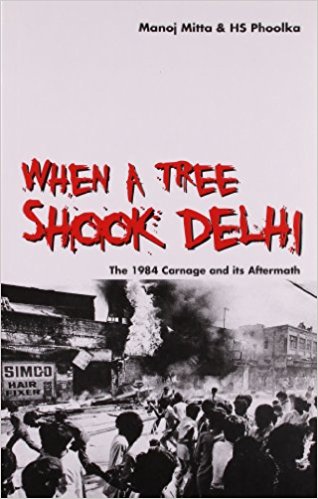 To those who lost family members, the 2733 lives extinguished in four days in the capital of the world’s largest democracy is a deep chasm which has destroyed the lives of those who had to carry on living. For many it can be a mere footnote because throughout the history of civilization, hundreds of thousands of men and women have been butchered for merely not tying a holy thread or keeping their foreskins or wearing a cap or tying a turban. Manoj Mitta and H.S. Phoolka have gone beyond and written a book on the 1984 anti-Sikh carnage and the struggle for justice by the victims of the killings. When A Tree Shook Delhi bridges both aspects of the violence: what transpired on the streets of Delhi and how the very powers that were responsible for the safety of the people have covered it up over the last quarter century. The carnage took place in the aftermath of the assassination of the then Prime Minister Indira Gandhi by her Sikh bodyguards.

The reason this book is important is that post-1984 we have had at least two major instances of communal violence in the country: post-Babri Masjid in 1992, post-Godhra in Gujarat in 2002 (790 Muslims + 254 Hindus + 223 missing). Yet, nothing has come out from either of their inquiry com-missions or the 1984 carnage commissions by way of punishments or penalties for those who committed the crimes.

A book of remembrance is also a book of caution against being misled. For example, it shows how the Ranganath Misra Commission (1985-86) operated. The sitting Judge of the Supreme Court first convinced the aggrieved parties to conduct an ‘in camera trial’ and effectively kept the media out. Then he launched an ‘in camera within camera trial’ where he spoke one on one with key witnesses. Finally he gave a report that gave a clean chit to the perpeturators of the violence. Even his successor, Justice Nanavati (2000-2005), who conducted a much more detailed inquiry gave a clean chit to the aggressors.