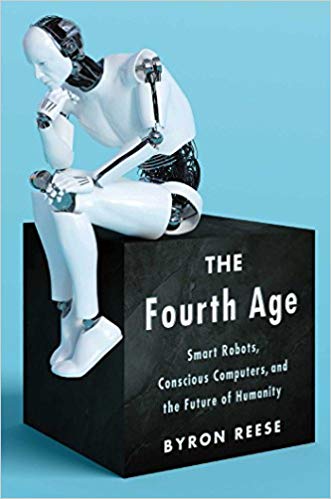 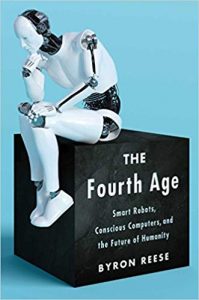 More than at any time before in history, we are questioning the impact of technology on our lives, society, and even human existence itself. Technology is changing life as we know it at such a breakneck speed that it leaves us reeling from the disruption and need to understand what each new advancement will mean for our future: there is a surfeit of predictions but of course no one knows for certain. In The Fourth Age: Smart Robots, Conscious Computers, and the Future of Humanity, Byron Reese takes us back in time to put technology in perspective as we know it today.

Don’t let the double-barrel title of this book deceive you into thinking that this is another technical deep-dive into today’s emerging technologies. It is first of all extremely entertaining, and second of all meant for everyone, not necessarily in that order. What the author does is to travel back and forth in time to deconstruct the core beliefs that undergird the various views on robots, jobs, AI, and consciousness. The book is a guide to the thorny issues that undergird the opinions and precautions that experts so passionately and confidently avow will ‘make the world a better place’. With stories and examples from history, research and just everyday life, this book makes you laugh out loud at the wit it is generously sprinkled with throughout. You will find yourself wanting to mark passages and sentences for discussion with others. The goal of this book is to help the reader understand his own beliefs and from then on understand the claims of technologists. It is a brisk walk through 100,000 years of human history, discussing big questions along the way, and exploring the future to come.

The questions the book grapples with aren’t about transistors, neurons and algorithms. They are about the nature of reality, humanity, and the mind. According to Reese, confusion happens when we begin with ‘What jobs will robots take from humans?’ instead of ‘What are humans?’ He believes that until we answer that second question, we cannot meaningfully address the first.

This is a five-part book, exploring five ages, the fifth being the one to come. Reese writes in short pithy chapters focusing on boiling various topics down to basic questions and several possible answers to have the reader re-examining long-held beliefs. In the first part, Reese systematically and quickly goes through human history, to find important developments—such as the discovery of fire—and shows us how we have always demonized technology from the start and right through to the present times in which we have prominent people in the field of technology all believing different things.

Reese devotes a good chunk of this book to exploring AI, which he believes is a difficult term to truly define, having two big problems—the word artificial and the word intelligence. What we know of as AI today is actually ‘Narrow AI’ designed to address a specific task. For example, the spam filter in your Inbox, which looks for specific terms and sets aside the mail in a different category, is a simple use case of Narrow AI. A neural network that sifts through thousands of images to compare with one image and then tells us how close the picture is to a particular medical diagnosis too is a use of Narrow AI. Even the more sophisticated AI uses we see today actually fall into this category. General Artificial Intelligence, where a computer system is versatile and adaptable, mimicking humans, doesn’t exist. ‘They (computers) simply do what they have been programmed to do. The words they output mean nothing to them. They have no idea if they are talking about coffee beans or cholera. They know nothing, they think nothing, they are as dead as fried chicken,’ writes Reese.

The possibility of coming up with this sort of AI however, is what frightens human beings, as it can eventually outsmart them and even find them irrelevant. At this point, there is no knowing whether humans will actually be able to create General AI. Contrary to what people think, Narrow AI cannot just grow to become General AI. Narrow AI has limitless applications but because the understanding of its difference from General AI is so poor, it fear-paralyses people into not wanting to use it and suggesting we switch off everything. Reese also explores robotics and automation and questions on whether it is true that 47% of all human jobs are going to disappear very soon.

Although the author claims he does not really write this book to tell us what he believes or what his opinion is, in the end, Byron Reese is an unapologetic optimist. He believes that the earth is a pretty good place to be, ignoring the horrific impact of climate change in his predictions. He believes that technology will actually help humanity rid itself of poverty, hunger, ignorance and war rather than be the catalyst for the doom that many envisage for the planet. Unlike other futurists, Reese thinks technology will actually bring about a golden age of sorts. Already technology has increased our life expectancy, enhanced standard of living, and it multiplies what people can do, so it is baffling that we look at technology through a negative narrative that shows a bleak future. Quoting Steve Wozniak the author writes, ‘All of a sudden, we’ve lost a lot of control. We can’t turn off our Internet; we can’t turn off our smartphones; we can’t turn off our computers. You used to ask a smart person a question. Now whom do you ask? It starts with g-o, and it’s not God.’

Mala Bhargava is a veteran technology journalist writing on gadgets and digital living since 1995.