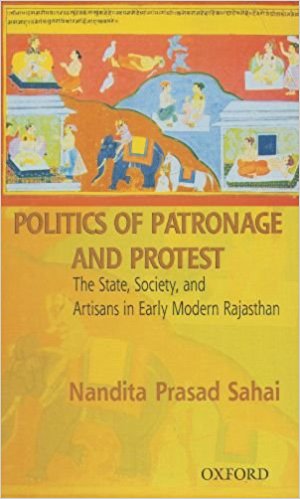 The book under review is a comprehensive exploration of the lives of artisans in early modern Rajasthan and associated complexities. An intricate web of relationships among a highly heterogeneous community/class called ‘artisans’ in the ever-changing dynamics of early modern Period in Rajasthan has been successfully nuanced. The title itself situates the study of a diverse social category in the specific socio-political reality termed by the author as ‘Early Modern Rajasthan’. The work successfully brings out the significance of caste as an identity while negotiating with the socio-political elites as well as larger market forces. This feature assumes greater significance as artisans get located in terms of economic set-up as well as in a caste ridden kin-based polity. Sahai also questions the usually held assertion that ‘the political systems of medieval and early modern India reflect a “paradigm of the negligible contact and lack of communication between social groups (in general sic) and the state”’ (p. 2).

The difficult terrain of sociological examination of the distant past has been carefully negotiated by making a liberal interpretation of the existing literature. The importance of the monograph does not lie in the novelty of the sources but in the dexterous use of the archival sources which have been used largely to construct traditional history of a very important but often neglected social category. Similarly, extensive use of secondary literature to locate the study in the context of diverse historiography is also commendable.