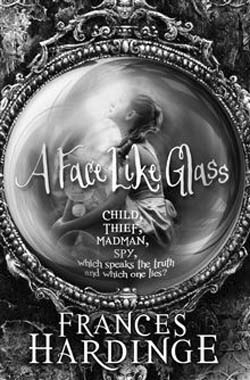 Alice fell down a rabbit’s hole and discov- ered a wonderland! Neverfell fell down into Caverna and found a world of darkness that is strangely exquisite, of sinister characters that have a hundred faces without souls and a grotesque underbelly of faceless poor! A Face like Glass by Frances Harding is about Neverfell, who fell into a ‘vat of curdling Neverfell’ and was found by Grandible, the cheese master, who makes fantastic cheese in the dark tunnels of Caverna. ‘Dairymancy’ is the word Harding uses.So fearful is he of the intrigues of the Court and the rivalries of other cheese-makers that he secures himself through innumerable doors and bolts from the others. ‘It is a giant web, Neverfell, full of bright-winged insects. All of them full of their own poison, all entangled, all struggling to live and to kill…’

Neverfell had a Face that expressed all that went on in her heart and mind, transparent like glass. ‘Every time a thought crosses your mind, it crosses your face at speed, like a wild pony.’ As Grandible’s assistant, her secure yet dank life ends with the arrival of Mme Appeline, a Facesmith. The bolts open and Neverfell escapes, coincidentally chasing a white rabbit, to steal back the sliver of Stackfalter Sturton cheese, the piece de resistance that Grandible had created for the banquet hosted by the Grand Steward of Caverna. Mme Appeline had asked for it and Neverfell had smuggled it out for her, until she discovered the terrible intrigues that had pushed Grandible into this reclusive life. A series of adventures brought Neverfell into the lair Maxim Childersin, the master Vinter.

The sinister tale unfolds with her becoming the Taster to the Grand Steward after the Stackfalter Sturton is stolen, audaciously, by the Kleptomancer! Neverfell is the eye of the storm and there are assassination attempts, among them the frightening glisserblinds—‘The slivers themselves were not disturbed by darkness, for they had never known anything else. Theirs was a world of brightly coloured scents, sounds felt through their bellies and the tremors of the ground and the sinuous touch of each other’s scales.’

Finally the threads of a terrible plot come together, as the Caverna begins to shift and rock fissures widen alarmingly. Neverfell did not belong to Caverna, she was the outsider and her impetuousness, the reaching out to people, her trusting humanity making her the victim of the hunt is the main thread in the story.

What is Caverna? A whole city that lies under the earth, of caves, tunnels, underground rivers, stalactites and stalagmites and magnificent petrified forests. No light falls into the city so there is no night or day, but they all observe a clock of twenty-five hours a day, the dark is lit by trap-lanterns that are fed on grubs with a vicious life of their own. Spiders, moths, poisoned birds and wasps fly around sent by assassins to kill their victims.

The artifice of Caverna begins early in the life of its inhabitants: ‘It was only in the labyrinthine underground city of Caverna where babies did not smile…There was nothing wrong with their features, but somehow one of the tiny links in the chain of their souls was missing. They had to be forced to learn expressions one at a time, slowly and painfully, otherwise they remained blank as eggs…the cheapest crèches learned only a handful of Faces. Richer families sent their children to better nurseries where they would learn two or three hundred Faces.’ Hence the importance of being a Facesmith!

‘The only aristocracy of Caverna were the Craft, the makers of true delicacies that crossed the invisible line between the mind blowing and the miraculous..’ The most exquisite crafts are created here—wines, cheeses and way out culinary creations that merchants from ‘overground’ come to a jealously guarded gate to buy these wares. There are the crazy breed of Cartographers who seem to map Caverna in an illogical way, twisting their minds to understand—being cartographic in Caverna’s parlance is being crazy! No one from the overground can enter and no one from Caverna can leave.

Society in Caverna is divided into the Drudges, who live out their pathetic existence in filth, poverty and malnutrition—echoes of the Victorian slums. The rich and powerful represent the Crafts, who need Face-smiths to give expressions to suit every occasion. The goings-on of these gilded character are reminiscent of the intrigues of early Renaissance Italian courts, the viciousness with which an unwanted person is put away. The heart of Caverna is the Grand Steward with two faces or rather two eyes and in almost 500 years of his life, he has cultivated two different personalities and there are times when the Right Eye is awake and when the Left Eye opens. But when they both open simultaneously, the end occurs.

In all this intricate spider’s web is the figure of the Kleptomancer, cleverer than the cartographers in mapping the place, a Leonardo da Vinci being with his mechanical contraptions that help him perform amazing feats like stealing the Stackfalter Sturton from the Grand Steward’s banquet.

Frances Harding’s style of writing is quite marvellous, obviously she has a strong developed culinary sense and her descriptions of the edible are worth reproducing: On the attention paid to the creation of Stackfalter Sturton: ‘The other cheeses had noticed their attendants’ favouritism and started to complain at their neglect. Angry bries went on an ooze offensive. One Popping Quimp triggered unexpectedly and had bounced and crackled halfway down the tunnel…’

‘The blending of True Wines was a dangerous business, particularly when they had conflicting personalities. In Maxim Childer-sin’s laboratory, a sigil-covered white barrel of Smogwreath currently sighed in one corner, whilst in the centre of the room a set of concentric salt circles confined a restlessly creaking vat of Addlemeau. The two Wines were not yet ready to blend. The Addlemeau still needed to develop its undertones of vanilla and the Smogwreath had not overcome its fear of strangers. Both, if disturbed, were quite capable of tearing strips off a man’s soul like the bark of a tree.’

At the Grand Steward’s banquet: ‘The newly arrived True Delicacy was a pale gold jelly in the shape of a tiny castle…Embedded in it was what looked like beautifully crated models of tiny birds with jewel-coloured plumage and long beaks….

‘A tiny spoonful of jelly was placed on her plate. Gingerly she dipped the tip of her tongue in it. The taste was a sound, a thin ribbon of blue-silver sounds blended together into a melody so loud and vivid that she looked around for the orchestra. The tune was the most haunting …a song of loss, confusion and remembered skies.’

The end, when Neverfell and her friends escape to the overground is quite lyrical and has a calming influence! Interestingly, one can conclude that the good and innocent belong to the overground—of nature, the freedom of the skies, air and the light of the above, whereas evil is the underworld of darkness, artifice and twisted passions.

A Face like Glass is a beautifully written book, the vivid descriptions and Harding’s imagination make it a worthwhile read. The story maintains a swift-paced tempo, but sometimes Neverfell’s impetuousness is physically exhausting for a middle-aged reviewer!

This is Frances Harding’s fifth book and from her acknowledgements she has spent time in the ‘cheese tunnels’ at Cheddar Gorge, at many other subterranean alleys among which are the Cu Chi tunnels in Vietnam.