War and the Sensory World 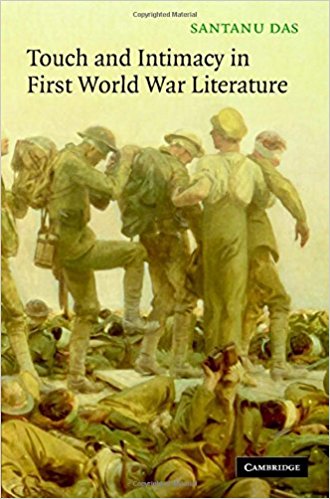 Technology has taken over both the methods of warfare and its representations, and the human body, the victim of war’s cruelty, has been effaced from our perceptions of armed combats in recent times. Santanu Das’s Touch and Intimacy in First World War Literature takes us to the war that was the first to use technology on a large scale, and the book firmly re-situates the soldier’s body at the centre of the zone of conflict. Trapped in muddy, dark trenches and in hospitals with their bodies ravaged by the flying ammunition, the soldiers experienced both pain and human contact with each other on their skin. Das’s book powerfully recovers this sensory world, examining the profound effect of touch ‘on the subjectivities of soldiers and nurses’ and its impact on the artistic form in war writings. Working with the dual aim of being both ‘recuperative and literary’, Das pulls in an impressive range of archival and literary material for a very scholarly analysis that yet remains keenly receptive to the nuances of meaning in the text,

much of which was produced under circumstances of great stress: trench diaries, journals, and letters of the soldiers; newspaper accounts; literary writing of the First World War . . . writers including Isaac Rosenberg, Siegfried Sassoon and Wilfred Owen; and memoirs of women nurses such as Mary Boden, Vera Brittain and Enid Bagnold (p. 6). ‘The present work’, Das says, ‘brings together men and women, combatants and nurses . . . private, officer, stretcher-bearer, ambulance driver’—in effect all those whose subjectivities were defined by the ‘haptic’ (a term central to Das’s discussion) experience of war. The tactile paradigm is extended into the authorial project as Das handles personal archival material of the war such as certificates, badges, letters, and diaries out of which dried flowers fall out. The ‘process’, he says, ‘is intimate and unsettling’ (p. 15). Describing the movement of the blinded soldiers being led by an orderly in John Singer Sargent’s painting Gassed that very poignantly sits on the cover of Touch and Intimacy, Das says: ‘The sense of touch defines space and guides the rhythm of their movement, as if new eyes have opened at the tip of their fingers’ (p. 1). Das’s prose often tingles with a sense of heightened perception, producing very graphic effects especially when he focuses on intimate situations and details.

‘Trenches’, the first section, examines the muddy underground world of the trenches in compelling detail, recalling the images from the film All Quiet on the Western Front, based on Eric Maria Remarque’s novel of the same name, to which Das alludes several times. The chapter ‘Slimescapes’, imaginatively titled so to draw attention to the pervasive mud, slush, slime on the western front, argues that ‘the muddy world of the trenches confronted the soldiers . . . with the threat, both physical and psychic, of dissolution into formless matter at a time when modern industrial weaponry was eviscerating human form’ (p. 37, emphasis Das’s). The mud was not simply mud, but was also composed of organic wastes, rotting flesh, and other debris and it became a monster that threatened to swallow the soldiers. This world of filth also subverted the ideas of heroism and glory associated with war, as the soldiers grappled with the degradation of being overcome by slimy matter. While the raw materiality of mud, rain and lacerated bodies of the soldiers are never allowed to lose their focus and immediacy, the discussion is deftly informed by the philosophical understanding of the issues of relationship between human subjectivity and the surrounding world of matter in the writings of Freud, Sartre, Kristeva, and other theorists. Mud, Das argues, becomes with many poets such as Sassoon ‘a political tool to evoke the horrors of war’ (p. 64). Exploring the impact of mud on genre and form of the war poetry, Das observes that ‘[t]rench mud is anti-pastoral’, and elaborates its relationship with both nature poetry and modernism (p. 66). While some of these ideas may not be entirely new, they are gathered in the discussion with great economy, with the existing scholarship being alluded to in the footnotes, though at times one wishes that Das had engaged more directly with the studies to which he refers the reader. A conversation, for instance, with Paul Fussell’s The Great War and Modern Memory (1975) and Jay Winter’s Sites of Memory, Sites of Mourning: The Great War in European Cultural History (1995), both of which are mentioned, would have more sharply delineated the achievement of Das’s book.

Male intimacies in the trenches and hospitals on the battlefield are discussed in the second part in an excellent chapter on ‘the dying kiss’. Given that a ‘new world of largely non-genital tactile tenderness was opening up in which pity, thrill, affection and eroticism are fused and confused’, Das delineates a highly nuanced field of male relationships in the trenches which include brotherhood, comradeship, friendship, surrogate parent-child bonds, as well as homosexual and homoerotic relations (p. 114). Refusing to succumb to the temptation to simplistically ‘queer’ the field, Das reminds us that while ‘[c]entral to the construction of sexuality is the idea of the male-as-subject-of-desire’, the male body during the war was ‘an instrument of pain rather than of desire’ (p. 117). The ‘dying kiss’ itself is presented as ‘a faultline in the contemporary construction of both masculinity and male bonding’, open to multiple and contradictory readings in the contexts of ‘homosociability and homoeroticism’, signifying both sexuality and human charity. The Christian ethos of service becomes a very acceptable explanation for gestures such as kissing a dying comrade as an act of humanity. The ‘dying kiss’ is also a repudiation of death and an assertion of human liveliness and dignity. In poetry, Whitman provides a model for the expression of masculine desire and the war poets are seen as following that model for making the physical attraction the basis of military bonding. ‘Wilfred Owen and the sense of touch’ is an extended discussion of the poet and brilliantly upholds the thesis of the book.

The women’s movement has very complex and contested connections with the history of the war period but one could accept the point Das is trying to make when he observes that ‘[d]uring war years, nursing was considered to be woman’s best chance to make up for the missed encounter with history’ (p. 185). While their experience may not be comparable in its intensity and horror to the experience of men on the battlefield, Das reminds us that the nurses worked under very demanding conditions, were occasionally exposed to shelling, and often, as in the case of VAD (Voluntary Aid Detachment), were untrained and from genteel backgrounds, and thus unprepared for the horrors of war. Nurses’ published and unpublished memoirs record their feelings of nausea, guilt, helplessness and numbness in the face of unbearable human agony, as they experience both ‘marginality and intimacy’—one from the field of action and the other with the wounds and the wounded. Das further frames these women’s experiences in the discourses of issues such as ‘relation between pain and testimony’, ‘trauma and guilt’, ‘nursing and narration’ and so on. Social and sexual mores are completely subverted as the nurses are made to touch and handle the naked male body and bear witness to its vulnerability. ‘This’, observes Das, ‘is what makes women’s war writings often far more depressing and painful than the men’s memoirs: the helplessness of the nurse is translated into the haplessness of the witness—and in turn, the reader’ (pp. 189-90). The writings of Vera Brittain, Enid Bagnold, and Mary Borden provide related but subtly varying perspectives on the traumatic experiences of the women nurses.

The range of textual documents examined, the subtlety of the analysis, the exhaustive bibliography and annotations—all make the book a commendable scholarly achievement, minor flaws such as occasional repetitiveness of ideas notwithstanding. To recommend the book, however, solely on the strength of its scholarship would be to undersell it and miss its spirit, which is to recreate the materiality of affect and render the identities and subjectivities of those ‘touched’ by the war palpable to the reader. In the postmodernist critical climate in which subjects have been seen as ‘constructed’ by discourse or through the ‘gaze’, Das’s paradigm offers a significant shift.