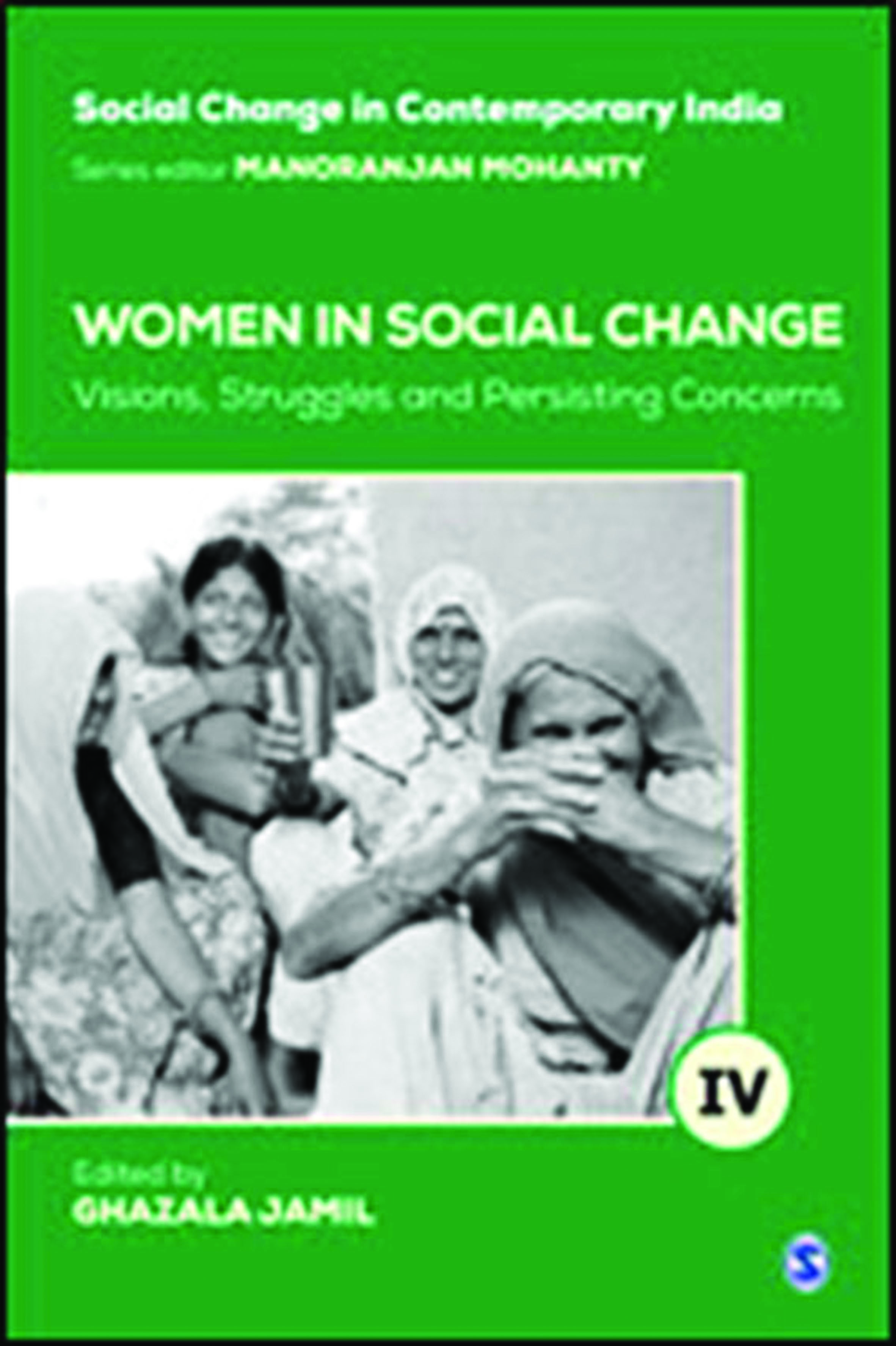 The three books under review critically contribute to our understanding of Gender, Inclusion, Violence and Social Justice. They capture several evidences of gender inequality, violence and exclusion across all levels; but they also show how gender issues in India can be read through different lenses of justice; how scholars, advocates and activists addressing these issues have brought different dimensions to the table, even conflicting at times.

Women in Social Change carries selected articles by illustrious scholars, lawyers and trade unionists from the Council for Social Development’s quarterly journal, Social Change—which has been publishing regularly for 50 years now—to present the shifting frames in the women’s rights discourse in India. Ghazala Jamil sets the tone with a detailed, comprehensive introductory essay and also provides a chronological relevance of the articles as they appeared in Social Change. Maithreyi Krishnaraj’s 2012 summary of the movement over a hundred years prefers to look at the movement as that which has diversified, instead of fragmented, while charting out its changing socio-political landscape.

The volume opens with Devaki Jain’s 1975 article that looks at society’s perception of woman’s behaviour on the basis of her role and the class and community she comes from, and highlights the importance of reordering social attitudes if women’s emancipation has to be truly achieved.

A similar strain is heard in Mina Swaminathan’s 1975 article where she reviews the Committee on the Status of Women in India (CSWI) Report that came out that very year, by pointing out aspects which she thinks have not received due attention as well as remedies suggested which she thinks are not commensurate with the dimension of the problems.

Society’s regressive social attitudes regarding women’s roles come up in Maniben Kara’s 1972 article again as she writes about gender discrimination at play vis-à-vis skilling, training, use of technology, hiring practices and lower wages and in Anita Dighe’s 1985 article which focuses on the ‘invisibilization’ of female workers engaged in the manufacturing sector, particularly if their employment is home-based. Sanghamitra Acharya’s 1992 article which uses a data-driven, case study approach, supports the above arguments as it shows that economic status and socio-cultural context determine participation of women in the workforce, not the qualification required or the desire/attitude of the person.

Vina Mazumdar’s 1994 article looks at how international discourses on the positioning of gender and women have influenced policy-making in India, and critiques how often a substantial section of elites and the government remain silent on exclusionary practices and inequalities. In the realm of political participation, a 1978 article by Usha Mehta talks of the reasons behind the low percentage of women in electoral politics, where women candidates complained in a survey that political parties not only failed in encouraging them to participate in politics, but sometimes also adopted discriminatory and discouraging attitudes. Mehta further links this to women’s domestic duties and responsibilities coming in the way of their political life, the wide gap between sexes and the unequal social set up. Extending this dialogue, Farah Naqvi’s 1998 article takes a look at the ‘spaces’ within the panchayat system to assess what makes political participation of women difficult or possible. While highlighting the role of social attitudes, Sanjay Kumar and Praveen Rai’s 2007 article in the volume provides us with the definition and indicators of women’s political participation and assesses gender exclusion in political participation from a historical perspective. 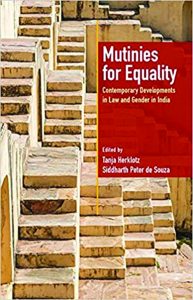 Mutinies for Equality: Contemporary Developments in Law and Gender in India, makes for a great read along with Women in Social Change to gather more examples and expand one’s understanding of the issues related to gender, inclusion, violence, and social justice. Sourav Mandal’s essay, for instance, explores how queer people face social pressure to abide by hetero-normative standards not often by legal constraints, but due to pressure from family and community members; Tanja Herklotz talks of the obstacles in feminist litigation with respect to family law; Saumya Saxena explores the dilemma of Muslim women’s rights activists against the practice of Nikah Hala since they face ‘uneasy alliances’ with Hindu nationalists; Mandira Kala engages with the legal reform processes regarding surrogacy in India and how various stakeholders have been included in the law-making process; Sameena Dalwai addresses the legal ban imposed on Mumbai’s bar dancers in 2006 and locates it in the discourse around who is a ‘good woman’ and an ‘honest worker’, and shows that gender roles are strongly interrelated with the concepts of caste and class. Fritz-Marie Titzmann, likewise, looks at how a concept is constructed and used to perpetuate inequalities between men and women, by linking it to the discourse on (anti-) nationalism. The concept she addresses is ‘obscenity’ and builds her case with the help of two incidents from 2015–the temporary ‘porn ban’ and a raid in a hotel on Aksa Beach in Mumbai.

Mutinies for Equality also addresses how State legislative bodies and courts in India have posed a challenge to gender equality and inclusion. Jason Keith Fernandes, for instance, critically assesses the Supreme Court’s decision in the Navtej Singh Johar v.Union of India (2018) case on Section 377 of the Indian Penal Code (IPC), and argues that although the judgment is important, yet, there are shortcomings in the arguments of the judges and the reporting around it. Saptarshi Mandal’s essay looks at court cases in which single mothers challenged the normalization of the patriarchal model of family and the state’s response in recognizing non-normative forms, while upholding patriarchal norms. Similarly, Krithika Ashok’s essay provides a historical assessment of case laws and shows that gender stereotypes and biases against women have continued in court decisions from colonial till postcolonial times. In another essay, Siddharth Peter de Souza and Medha Srivastava-Kehrer analyse the process of judicial appointments in the Indian Supreme Court and other courts, and point to the under-representation of women, which they say is the consequence of how gender identities are imagined in the appointment process. Jayna Kothari, on the other hand, argues how the Supreme Court ‘cherry picks’ its gender battles by highlighting cases such as the Court’s recognition of the right to self-identify one’s gender identity in 2014, while in the Shayara Bano case of 2017, it struck down the ‘discriminatory practice’ of triple talaq but refrained from a detailed discussion on the gendered dimension of triple talaq. Supporting Kothari’s argument, we find Katharina Wommelsdorff’s essay in the book that delves in detail into the Shayara Bano case by locating it in the broader context of the discourse around Muslim women in India.

Notwithstanding the challenges, the book also captures how, on the ground, alternatives to state institutions exist. Kalini Kokal notes in her essay, through case studies, that people in India often choose to resolve disputes, especially family disputes, outside state law and state institutions. Poornima Hatti and Aparna Ravi elaborate this thought by showing how victims of sexual harassment at the workplace in India prefer the internal route for complaints and redressal via the committees set up in an organization under the Sexual Harassment of Women at Workplace (Prevention, Prohibition and Redressal) Act, 2013, rather than lodge a criminal complaint against the perpetrator via Section 354A of the IPC.

A few articles in Women in Social Change also look at how gender is culturally constructed by a systematic study of narrative structures within a text—a tool that took root in the 1990s—and by looking at self-expressions by women. Historians Uma Chakravarti and Kumkum Roy’s 1996 article discusses how the discourse around family structures has emerged to suit societal needs, and how the family has also been a site of violence and conflict—a point made by Nandini Rai’s 2007 article earlier in the volume, where she uses the National Family Health Survey (NFHS) and National Crime Records Bureau (NCRB) data to provide a critique of family as a space of violence, and elaborates by saying that gender practices are central to the ways in which spaces are constructed, contested and transformed.

Sujata Mukherjee’s 2004 article analyses a range of films and shows how, in cinema, there has been a change from portraying women as objects of sexual gratification, shrouded by the responsibility of the reproduction of mankind—influenced by folklores and grand narratives—to allowing more nuances and layers to them vis-à-vis their dreams, fantasies and sexualities. Vivek Kumar’s 2009 article addresses the positionality of Dalit woman by articulating the linkages between the occupations they are forced to perform and the humiliation, stigmatization and social and economic exclusion that society subjects them to. He takes the reader to deeper layers as he uses the imagery of the Dalit politician, Mayawati, and asks if there is a latent casteism in the Indian women’s movement because it has failed to defend Mayawati as rival politicians and media narratives subject her to hostility and humiliation that are casteist in character.

This space for contestations within the women’s movement is also reflected in Amit Ranjan’s 2015 article that scrutinizes the text of the Armed Forces (Special Powers) Act, 1958 (AFSPA) and argues that the impunity with which armed forces personnel have committed sexual violence wherever the Act is in force, despite the security clauses in the Act, has the tacit support of the dominant majority and brings forth the concern about ‘selective outrage’ even from women’s rights groups.

Flavia Agnes’s 2016 article also brings forth such contestations as she questions if the Codified Hindu Law has been able to impact social change. For instance, she highlights how the Prohibition of Child Marriage Act (PCMA), 2006 prohibits child marriage, but does not make the marriage void. Although some groups have been campaigning towards declaring all child marriages as void, Agnes asks, ‘But from the context of social justice, what will be the impact on young Hindu girls who are married upon reaching puberty and are deserted even before they become majors? When a destitute girl, with a baby in her arms, approaches our courts, would it be in the interest of justice to declare, as the marriage is void, that she is not entitled to the basic and fundamental right of maintenance?’ (p. 259). 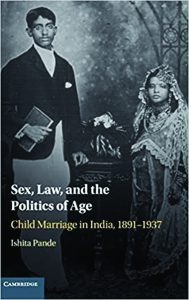 Ishita Pande’s Sex, Law, and the Politics of Age, 2020. She centres her focus on the Child Marriage Restraint Act (CMRA), 1929 and traces how a normative understanding of childhood and adulthood was constructed in the colonial and postcolonial times, and how this normative understanding was rendered a universal and uniform character through age-based speculations in order to create ‘modern subjects’. The CMRA was repealed in 2006 and replaced by the PCMA, which preserved the minimum ages of marriage for boys and girls as set by the CMRA, but made underage marriage voidable upon the wife’s option. Pande argues that age, like gender, needs to be historicized and theorized through questions like, ‘Why, when, and how did we come to an agreement that it is not puberty, but age, that marks the great boundary in the lives of boys and girls?’ (p. 13) and arguments like, ‘While we, as historians of India, have made sophisticated use of gender as a category of analysis to write histories of child marriage, and have noticed how these debates on child marriage made possible the emergence of woman as a subject of rights, we have assumed the naturalness of the use of chronological age to structure and control access to such rights’ (p. 12).

A reading of the three books together drives home the understanding that ‘there is no linear process from inequality to equality’ (a point spelled out by Herklotz and de Souza in their introduction to Mutinies for Change); gender equality, inclusion, justice and changes in the law involve a cumbersome process of negotiations at various levels; and that, as Durgabai Deshmukh in her 1972 article in Women in Social Change points out, there are limits to emancipation by law and one of the key roles of the democratic state is to alter people’s social consciousness and attitudes.

Juanita Kakoty writes with a sociological imagination and works in the field of Child Sexual Abuse prevention.