Tributes to an Iconoclast Scholar 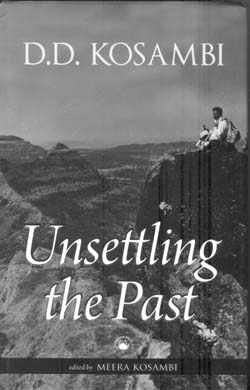 We have just completed the golden jubilee year of the publication of D.D.Kosambi’s ‘Combined Methods in Indology’ in the Indo-Iranian Journal in 1963. This remarkable essay was in print several decades before the vocabulary of ‘cultural turn’, ‘linguistic turn’, ‘ethno-archaeology’, ‘ethno-Indology’, ‘ethno-history’, ‘reading texts’, ‘collaboration of philologists and anthropologists’, and ‘multi-disciplinary studies’, etc., had become buzz words in academia. That essay had anticipated all of these sans semantic sophistry. It is widely acknowledged that Professor Damodar Dharmanand Kosambi (1907-66), though a professional mathematician, had brought a major paradigm shift in the writing of Indian history in general and its earliest period (‘ancient India’ in popular parlance) in particular. In the last nearly half a century since his untimely death in 1966, there have been several assessments of his life and works. These have taken the form of not only several commemorative volumes but also independent enquiries into his writings in diverse fields —Sanskrit literature, numismatics, India’s energy policy and the world peace movement, and of course, in his professional domain of mathematics. Such assessments have inevitably traversed different extremes—ranging between high eulogies (prasastis) and outright condemnation.