Travails of a Subcontinent Sundered 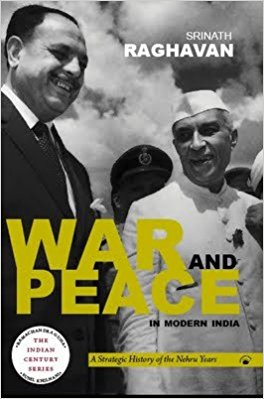 Travails of a Subcontinent Sundered
Raja Menon
WAR AND PEACE IN MODERN INDIA A STRATEGIC HISTORY OF THE NEHRU YEARS by Srinath Raghavan Permanent Black, 2010, 359 pp., 750
August 2010, volume 34, No 8

A part of the Indian century series, edited by Ramachandra Guha and Sunil Khilnani, this book by Raghavan throws fresh light on
the travails the Indian state went through immediately after partition. A number of myths and legends have sprung up about the Nehru era, as a result of deductions made from what first hand literature was readily available at the time. A notable example is the Nehruvian tirade against the armed forces delivered to the first British CinC, when he went looking for political directives. Raghavan’s book cites an equal number of references that give a balanced account of the limited choices available to Nehru at the time, giving ‘Nerhu’s approach to diplomacy and coercion a certain coherence …’ Nehru is criticized for both excessive idealism and realism, which is unfair just as he is criticized for leading the country into war with China, and for not leading his country to war with Pakistan.

The book has seven major chapter narratives, on Junagadh, Hyderabad, Kashmir, Bengal 1950, The Disputed Border 1948–60 and China 1961-62. These are preceded by an excellent chapter on how the author perceives the development of Nehruvian foreign policy and early Indian strategic culture. Most Indians of the reviewer’s generation are fairly dismissive of the Junagadh crisis, requiring as it did, no military intervention and a crazy Nawab with his ridiculous canine infatuation. But in many ways it was to be a test case for all the crises that followed. Most startling is the appearance of Bhutto’s father Shah Nawaz Bhutto, the earliest Bhutto thorn in India’s side, and the Dewan of Junagadh, the premier princely state of Kathiawar.