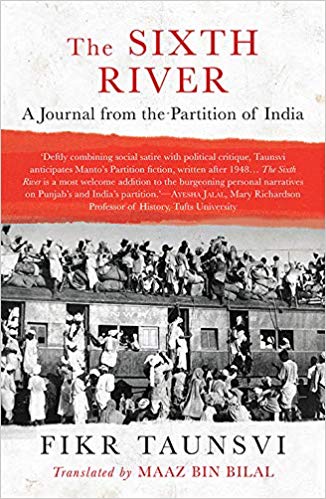 Translation as Retrieval
Fatima Rizvi
THE SIXTH RIVER: A JOURNAL FROM THE PARTITION OF INDIA by Fikr Taunsvi. Translated from the original Urdu Speaking Tiger, 2019, 173 pp., Rs. 499
January 2020, volume 44, No 1

Fikr Taunsvi or Ram Lal Bhatia was an Urdu language poet and satirist, from western Punjab, in present day Pakistan. Maaz Bin Bilal explains that Bhatia found his name ‘vahiyaaat’ or ‘fake’ and ‘absurd’ and adopted the pen name Fikr Taunsvi in the tradition of Urdu/Hindi language poets—Fikr standing for the reflection and deliberation that was at the root of his poetry, and Taunsvi after Taunsa Sharif, where he belonged—a place known for its Sufi shrines. Bhatia was a devotee of Khwaja Suleiman Rasool, a pīr patronized by both Muslims and Hindus. Taken together, the pen name epitomized contemplative thought and syncretic sensibility, two essential prerequisites for a radicalized, progressive poet of the second quarter of the twentieth century. Occupationally, Taunsvi is known to have broken away from his father’s small-time business as a shopkeeper, because his conscience pricked him on account of his father’s dishonest dealings. Taunsvi was employed with Adab-e-Lateef and later with Savera, both progressive journals, in Lahore.

Chhata Darya, now available in translation as The Sixth River: A Journal from the Partition of India is the spontaneous overflow of a poet’s powerful feeling in prose, as he witnessed /experienced the ruin of Lahore, while every institution was demolished not only in brick and mortar but in spirit and essence during the communal riots of the Partition (of the Punjab).