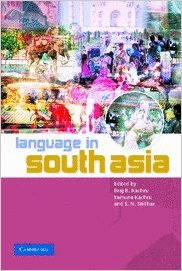 The jacket of a recently published book on Macaulay by Zareer Masani says cheekily, ‘If you’re an Indian reading this book in English, it’s probably because of Thomas Macaulay’. Controversial as his proposal to teach Indians the language of the Queen then was, no less heat is generated when one mentions his name today in India. However, as Robert D. King would have it, ‘English has become simply one more Indian language, the language used by the minority, true—but a very articulate Indian elite minority—and by many writers with vast international sales and readers of important Indian language. That I think, it is not likely to change’ (Language Politics and Conflicts in South Asia).

Change, evolution, importation, modification, cohabitation and export have been the gist of linguistic history of Indian subcontinent and the editors Braj B. Kachru, Yamuna Kachru and S.N. Sridhar have tried to sketch a biography of Language in South Asia dividing it in 10 parts—each tracing an aspect as deeply as is required to get the feel of that.