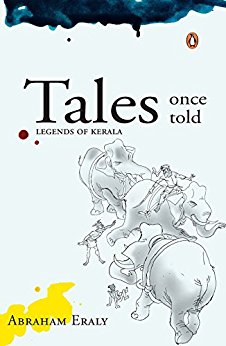 Abraham Eraly has selected and transcribed a collection of legends from Kottarathil Sankunni’s  Aithihyamala which is an eight volume work published between 1909 and 1934. The translation of the chosen stories is easy and lucid, with no embellishment. Eraly has the confidence of someone who understands the culture and the varieties of communities which integrate in the fabric or canvas of daily interaction. So, essentially, the stories are historical figures, and the legends woven around them. While it is difficult to date these stories, unless one is a Malayali conversant with dating techniques, the stories have a timeless quality about them.

In some sense, it is a work which revels in the innocence and the depravity that often go together. I always believe that people who say they have no interest in money or power are often interested in the use-value of things. By this primary commitment to consumption they remain composed about their inability to protect anyone’s rights.

A lot of the questions of human rights and identity are often interpenetrated by this ability to hide under the “conventions” called our culture. So, hopefully, the legal questions of what are democratic rights will inform the nature of modernity, while the stuff of legendary prowess may remain with us for purposes of entertainment, or for interpreting stereotypical representations, where we are forced to conform with tradition because it is the habit of our respective communities to expect this from us. When we passed the station called Tenali on our annual visits to Kerala, my father was always genuinely excited and pleased. “Tenali Raman!”   he would say … and then tell me about him. The story I found most interesting was about the king under-paying Tenali who then  in revenge, reared a stallion with very little food (just enough to stay alive and healthy but behave neurotically) and he gifted this horse to the king. There is danger in that! Whether it is Tenali or Birbal in Akbar’s court or Sakthan Thamburan in Kerala’s legend, there is a sense of danger and laughter which accompanies them—a ruthlessness and a fearlessness. It is not surprising that the jester (sometimes he is the grave-digger)   in Shakespeare is so significant as the site of wisdom; and a jester-king as Sakthan Thamburan has power beyond all others.

Eraly provides notes to help us, in the preface. They are not very intrusive, but in fact are charmingly part of the text. All the characters do and say notable things, so the yarn of history is located not just in caste, age and gender politics, but the hierarchies that are the staple of the readings themselves. It is problematic when he quotes to us stories which show the violence and ugliness of everyday life, and the competitiveness and malice, the horror and the demonology, yet the narrator redeems the readings which are too sexist   with comments of his own. I think, sociologically, it would be problematic to read these in moral tones of rightness and wrongness, what we can do is read them for the sheer value of being presented with materials which were the stuff of popular lore—these are not “folktales”, he is quick to tell us, but legends.

Today many of the questions of magic and religion in contemporary society have been foregrounded again in common and popular cultures. Do we believe the event of sorcery? Keralites, if they are not Mar Thomites (a denomination of Christians who are patently clear on the subject that if you believe in God, the devil can never touch you) are engrossed in the subject of traditional wisdom around sorcery and healing. Gilles Tarabout of the Maison des l’hommes, in Paris, has interesting work which shows that shaitan  (chattan) sewa  has cultic premises which are completely accessible in Ezhava communities, and when it comes to alcohol merchants wishing to foreground pros-perity and ritual commitments, we as sociologists cannot get pious about who is a “deva”. There is a tradition in yoga, also, which deals with appearances and disappearances, but the mystical tradi-tion in specific non-dualist interpretations, say that that these powers must be ignored in order to stay on the path which leads to the ultimate light.

Magico-religious practices which run into the domain of healing are perhaps the most significant of the boundary crossings that are made apparent to us in such legends. Sociologically there is no diffidence in working with these materials, one must only tread the path between experience, subjectivity and objectivity as well or as bravely as we can. Eraly, as a writer working with texts which inscribe the oral narratives, wishes us to know that such a genre exists. As a diaspora Malayali with deep roots in Kerala which are kept alive by frequent returns, I must say that Kadamattath Kattanar has survived the tests of time and memory. It is good that Eraly has brought to light the large body of work which deals with the best known of these powerful figures. Kattanar (which means an orthodox priest) is a Christian sorcerer, and he is unusual because people say that “he learnt from the devil to cheat the devil”. Eraly describes him as having lost his way in the forest and encountering an occult sect. This sounds more probable. Many cartoon strips revolve around the Kattanar and television has also contributed to serializing stories. Peasant cultures archivalize confrontations through such stories. They are really about status differences and oppositional forms of politics between communities and sometimes between men and women where power leads to a tangle of limbs in death or sexual consummation. There are never any winners in such games, only circumlocutions of the never-ending passionate feud. Yet as human beings, the expressive forms of these feuds continue, and the use of language, absence, fear, rhetoric and substitution are ways by which people are rendered obsolete or seem for the moment like winners, but the battles and the cycles of combat continue. Shishupal achieves, as Ravana does because he never forgets divinity, while hating. Memory is sufficient for this attainment, which is actually quite involuntary.

This brings me to the other collection of stories, a feminist collection, and need I say, “all are by daughters, all girls”. Since the writers are all Malayali women, one sees a furore of activity, some- times polite, sometimes furious. It is a little alarm- ing to read story after story about rape, but since the statistics on rape of women is inordinately   high in Kerala, as are the cases of suicide and of melancholia, we really cannot blame it on the rain.

What these writers do is clear out the specifities of the caste debate, and the differences and the problematics of symbiosis. They deal with the unmarked woman’s body, which becomes the object of predatory attention. The pages spill out the rage and the sorrow. I shall not tell the content of these stories, because the task is to point out the validity of this cry, this lamentation, this quiet weeping. The rape of the psyche becomes most significant when it is the story of a child desperately coping with a parent’s absence. To conclude the possibilities, perhaps it is a feminist task to describe the occasional rape of men, by ambitious women. I am thinking specifically of  the film, The Blue Angel, which is the epitome of such a  rape, where Marlene Dietrich sings for the Nazi soldiers in a husky voice, and an infatuated intellectual gets trussed in the process.

Michael Crichton  also brought our attention to the problem when he showed that when women have power they often behave like masculinists. In this collection Indu Menon frightens us with   her story of the dangers of being always politically correct about alternative sexuality, when it too might define the predatory quality that defines rape.

There are no two ways of thinking about rape, and Sara Joseph plays with the idiom in the same brilliant and fearless way that she retold the Sita story many years ago. P. Vatsala meanders in poetic license to show us that when men have duties, they return to them, and the contexts of women’s identity are shorn of their power to keep them. Manasi unwaveringly tells the haunting story of a dream time which would be labelled as insanity. O.V. Usha tells us that the past never really goes away, and that in our happiest moments, we are still incarcerated by memory. Gracy writes of the sheer exploitation of dependency, and the spectre of babies not born in cohabitation which demonize relationships. B. Chandrika writes an improbable story which has the power to persuade you it is true, ‘not fiction’, but the author refuses to corroborate the critic’s allegation of its truth value. K.R. Mallika narrativizes the pride and significance of identity, where people hang on to their caste for dear life. K.R. Meera provides the terrifying space of old people’s wisdom where their dentures rattle as they tell us horrible truths. Wisdom and beauty, what can they mean, when memory shreds?

A.S. Priya’s Onion Curry and the Nine Times Table is hilarious, the only really funny story in the lot, which captures an existential sadness with the delicate tracery of unslit veins. May children always save us from our fears and sadnessess, (this seems to be the intrinsic prayer in this story) and the children need not always be our own, as activists working with children have shown us. Githa Hiranyan discusses that unutterable moment when innocence, in spite of fair warning to those who can help goes unheard, and the victim is sucked   into degradation. ‘The Lesbian Cow’ by Indu Menon is so stark, it could be a Dahl story. No political point here, just sheer fear. Sithara S. concludes with ‘The Fire’, which again horrifies by its twist of seeming innocence and yet the culpability and rapacity of the victim who seduces the rapists into endless and despondent bondage.

Are we  the characters when we write, do we become them? That is a mystery which authors sometimes won’t tell us about. It is a problem as old as The Idiot and as young as Lolita.