Toward Making Utopia a Reality 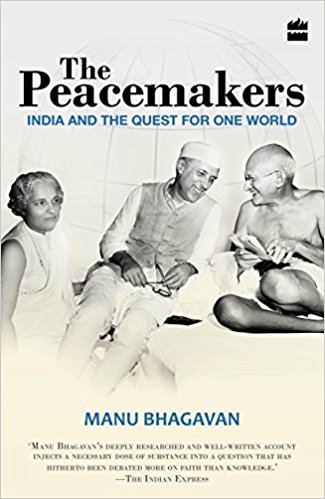 Toward Making Utopia a Reality
Lakhan Mehrotra
THE PEACEMAKERS: INDIA'S QUEST FOR ONE WORLD by Manu Bhagavan and Anne Feldhaus Harper Collins, 2013, 237 pp., 499
April 2013, volume 37, No 4

The foundations of Independent India’s Foreign Policy are contained in Article 51 of the Constitution which stipulates that the state shall endeavour to (a) promote international peace and security (b) maintain just and honourable relations between nations (c) foster respect for international law and treaty obligations in the dealings of organized peoples with one another; and (d) encourage settlement of international disputes by arbitration.

Article 51 thus is the pole star of India’s foreign policy. The Directive Principles contained therein are steeped in India’s tradition of Vasudhaiva Kutumbakam, the entire world is a family. Throughout the ages this universalism has governed India’s thinking and its contacts and relations with the rest of humanity. Now in a stunning discourse on the evolution of India’s policy as a champion of One World, Manu Bhagwan sums up various phases of India’s Quest for One World. That policy developed under the inspiration of Gandhi and Nehru and its advocacy was carried out passionately at the United Nations from its very inception most of all by Vijaya Lakshmi Pandit, Jawaharlal’s sister.

In his systematic and highly illuminating narrative, the author takes us back to the formative years of India’s Constitution from 1946 to 1950 and draws our attention to the Objectives Resolution which was moved by Nehru in the Constituent Assembly soon after it came into being and was adopted before its proceedings came to a close three years later. The Resolution sought for India a Constitution that would establish an Independent Sovereign Republic, ‘Where shall be maintained the integrity of the territory of the Republic and its sovereign rights on land, sea and air, according to justice and the law of civilized nations; and this ancient land attains its rightful and honored place in the world and makes its full and willing contribution to the promotion of world peace and the progress and the welfare of the mankind.’ The book highlights the ways in which Gandhi and Nehru worked together to create a coherent vision of external affairs for the new Indian state. The two agreed that an external, democratic authority, world government, was needed to check the power of the state all around. The idea of One World was a veritable part of India’s ‘full and willing contribution’ to mankind’s progress and welfare.

Both Indian leaders felt that since the Peace of Westphalia ended the Thirty Years’ War in the 17th century and established modern notions of state sovereignty in Europe, the nation-state had been pernicious and oppressive. Hitler symbolized that notion of state sovereignty most of all. The two leaders imagined a future One World that would move past this old violence-prone arrangement. Their idea was to go beyond the nation-state to establish some kind of a world government that would curtail its oppressive wings. World energies had to be diverted from wars to the tasks of ridding mankind of its colonial heritage of poverty and backwardness in a common sharing of peace and prosperity ‘in larger freedom’.

The book then journeys through India’s central role in the production of the United Nations’ basic instruments on human rights, namely, the Universal Declaration of Human Rights, the International Covenant on Civil and Political Rights and the International Covenant on Economic, Social and Cultural Rights. Moved by its concept of One World India tore through the divisive walls of the Cold War that were being injected into defining these rights with the West putting a premium on civil and political rights and the socialist bloc on social and economic rights, each to the detriment of the other.

As a disciple of Gandhi, Nehru firmly believed that while nonviolence alone was the answer to a world that sought permanent relief from war by banishing it from the minds of men as proclaimed in the United Nations Charter, a universal commitment to a just and equitable human rights regime alone could guarantee the emergence of a world without violence. Their concept of One World was thus packed with a moral stature that believed in the intrinsic inviolability of the human being which would include a life of dignity and self-respect in an environment that protected his basic human rights everywhere on earth.

Manu Bhagwan gives us a telling account of how the world trembled in fear and stared into the abyss as the Axis Powers, Germany, Italy and Japan, unleashed their blitzkrieg in Europe, Africa and Asia between 1939 and 1941; how the League of Nations established in 1919 in the aftermath of World War I failed miserably and eventually collapsed in the face of the looming war; how Hitler lifted the spirit of a Germany humiliated and crippled at the end of the First World War by using the racist card against Jews and Marxists in his Mein Kampf, became Chancellor in 1933 and used his charisma to assume absolute control over the state; how the entry of the US into the war after the Japanese attack on Pearl Harbor on 7 December 1941changed the tide of fortunes against the Axis Powers; and finally how FDR’s Four Freedoms: of Speech, of Religion, from Want and from Fear, and the Atlantic Charter provided a vision for the post-War world. It was in that context that Franklin Delano Roosevelt favoured independence for India. Post-Independence India saw immediate resonance in the US President’s vision of the post-War world and its own.

FDR had received full support in the matter from Wendell Willkie, his Republican Challenger in 1940, and later his Special Envoy, who after a global tour propounded that Americans shared the responsibility of making the whole world ‘a commonwealth of nations’; that millions of people in Eastern Europe and Asia were no longer willing to be ‘Eastern slaves for Western profits’; that men’s welfare throughout the world was interdependent; and that the people of the East wanted the United States to join them in creating a new society, global in scope, ‘free alike of the injustices of the West and the political malpractices of the East’. Willkie christened his book on his tour, One World. The title caught Nehru’s eye as he read it in his prison cell in 1943 and it fired his imagination.

In 1945, when a tentative framework for creating a new international organization to help maintain peace and security was taking shape and preparations got underway in San Francisco to establish the United Nations, Gandhi released a statement containing his vision of peace and security. He described war as something based on deception and fraud, highlighted his opposition to a world security framework based on mistrust and fear, urged allies to give up faith in the efficacy of war and prescribed four steps to help ensure a lasting and just peace. First, India had to be made independent, to herald, in turn, freedom for all peoples of the earth from exploitation. Two, the goodwill washing as waves over the world had also to reach the shores of Germany and Japan. Old opponents had to be made friends, so that the basis for further discord would be removed. Three, the Axis should not be subjected to humiliating, punitive terms. And finally, the world should move towards international disarmament and establish a world police force. Vijaya Lakshmi Pandit brought these truths home most eloquently to the representatives of the world community gathered at San Francisco in 1945 to lay the foundations of the United Nations which it did on 26th June that year.

After India gained Independence, Pandit Nehru spelt out his ideas over One World more specifically as India’s first Prime Minister and Minister for External Affairs. In a radio broadcast under Chicago’s Round Table programme, Nehru maintained that tortured humanity hankered for real peace, that millions yearned for World Government and One World, that it must and will come and that the machinery for it could be ‘the federal principle, a growth of the idea underlying the United Nations, giving each national unit freedom to fashion its destiny according to its genius, but subject always to the basic covenant of a World Government.’ Nehru was convinced that the politics of confrontation pursued by the two power blocs should yield ground to cooperation for One World to become a reality. In his last address to the United Nations General Assembly in November 1961, he warned that the only choice for humanity left was to ‘cooperate or perish’.

The Cold War that had divided the world asunder in Nehru’s time saw its end two decades ago but the world is far from being one as conflicts rage around. However, the dream of One World lasts. Its realization is the only possible way out from humanity’s continuing tale of suffering and misery. Manu Bhagwan’s incisive analysis of the role of India’s Peacemakers is a timely reminder to torn humanity yearning for peace to move vigorously in that direction.

Lakhan Mehrotra was formerly Secretary to the Government of India in the Ministry of External Afairs and United Nations Envoy in Cambodia/Indonesia.