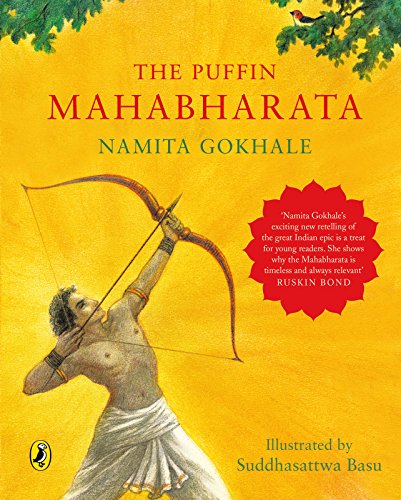 The first dilemma which confronts the reviewer of any of the multiple retellings of India’s two great epics is the choice of an appropriate yardstick for assessing the book. It would obviously be unfair—indeed, faintly ridiculous—to compare it with the original. Vyasa’s Mahabharata was written at a different time, in a different medium, for a different audience, by one of the greatest poets in the history of the world. In decades—perhaps centuries—that followed, other equally skilled hands fleshed it out till, spanning more than 80,000 verses it became the world’s longest epic. To capture its essence in a mere 185 pages—including 30 odd pages of illustrations and a few pages of glossary—would be a challenge for anybody. Let me be clear. This is not a criticism of Namita Gokhale’s beautiful book but, somewhat hesitatingly, it takes issue with the comments by two very famous literary figures (both of whom, incidentally, this reviewer greatly admires) quoted on the back cover of the book. One says that this rendition ‘retains the essential structure of the narrative without diluting its epic proportions.’

Another begins her tribute by saying, ‘Without sacrificing the complexities of either the narrative or the characters…’ (In both quotes, italics added). This kind of extravagant and, to me, irrelevant, praise misses the point. Of course, the author has no option but to ‘dilute’ Mahabharata’s ‘epic proportions’. And, it is not her fault, that such a short version cannot capture the ‘complexities’ of either the narratives or the characters.

Being an accomplished novelist the author narrates the famous but intricate tale—or, shall we say, multitudinous intertwining tales—with ease and simplicity, moving smoothly from one dramatic episode to the next. Inevitably, episodes had to be picked and chosen. Many important incidents had to be dropped or passed over speedily. Take for instance, Gokhale does record the pre-battle negotiations between the two increasingly hostile camps. In this she includes the dispatch by Kauravas of Sanjay as emissary to the Pandavas. He is sent back with a clear terse ultimatum: Justice or war. However, somewhat inexplicably, she misses out the famous offer of Yudhisthara to settle for just five villages.

Naturally in this short version, it was not possible to capture the depth and richness of the leading characters in the original massive epic. Among the star cast one of the persons who perhaps does not get her full due because of the compulsions imposed by the need to abbreviate is Draupadi. It is not without reason that modern champions of women’s rights prefer the assertive Draupadi to the more docile Sita (though it must be added that even the latter is a stronger individual in the original Valmikian epic than in the later versions produced in more patriarchal times) There are many passages in the epic where Vyasa injects impressive self-assuredness into Draupadi. Gokhale does not ignore them but is not quite able to reproduce the vibrancy of the original. Thus, for instance, Draupadi’s brilliant taunting of the un-Kshatriya-like behaviour of Yudhisthara, in a conversation during the exile in the Dwaitavana forest merits just three brief (though eloquent) sentences in the Gokhale version. Perhaps it deserved more space.

Again our author quite rightly declares right at the outset, ‘at the core of the story, like the seed in a fruit’ is the Bhagvad Gita, where Lord Krishna and his friend Arjuna discuss the big questions of life’. Maybe the young readers, whose attention she has captured with her exciting narration, would have profited from a little longer coverage to this the greatest work of Indian philosophy, when the moment arrives in the text.

Happily, Gokhale does give generous space to an episode which somebody producing a text full of exciting action may well have been tempted to deal with cursorily. In her chapter entitled ‘The Lake of Questions’ the reader gets a true flavour of the exchange between Yudhisthara and his father, Dharma, the god of righteousness, who disguised as a yaksha subjects him to a rapid fire interrogation on philosophical and ethical issues.

Clearly, anybody trying to attempt a retelling of the Mahabharata which is faithful to the original but appropriate for the young in contemporary society, has to take some very important decisions. To put it bluntly: how does a modern day author trying to narrate the story to today’s children deal with such episodes as the unusual birth stories of leading characters, be it the brothers Dhritarashtra, Pandu, and Vidura or the Pandava brothers. The author manages delicately to introduce their extra-marital births but draws the line against trying to explain why Dhritarashtra was born blind and Pandu pale!

An equally delicate matter is the treatment of the unabashed use of deceit (with collusion of Lord Krishna himself) which helped the Pandavas triumph ultimately in the great war. The author is careful in handling the deaths of Bhishma, Karna and Duryodhana lest the young reader be influenced by the ‘end justifies the means’ tenor of these incidents. She does, however allow Duryodhana to finally charge his cousins with having triumphed through fraud and deception, in a simple, unadorned but trenchant dying declaration,

You have won the war by base tricks and deceit. You killed Bhishma with a stratagem and Drona with a lie. The noble Karna was defenceless when you attacked him. You have not behaved as true warriors. As for me, I have had a full life, a royal life. My friends have loved me and given me their loyalty. I die only to join them, and leave sorrows of life to you.

In one respect the author decides to go the whole hog with the epic: its occasional bouts of gory violence. She does not shrink from describing in plain terms the most horrendous acts of violence which occur in the Mahabharata even before the final horrific battle. Perhaps she believes that the young of today are immune to the horror and brutality of murder and carnage. But, perhaps, in her brief rendering these appear even more gruesome than in the original where they are part of a much larger setting: here they come thick and fast, and are described with unhesitating ferocity—Ganga ‘murdering’ her seven children by Shantanu, Bhima tearing apart Jarasandha’s body, Dhristadyumna triumphantly waving the severed head of Dronacharya (the vivid illustration of this scene, leaving nothing to imagination!).

Illustrations are among the highlights of this beautifully produced book. The manner in which Suddhasattwa Basu brings to life some of the well known episodes and personalities ensures his place among the best illustrators of books for the young.

The appeal which the Ramayana and the Mahabharata continue to have in India is amazing enough; perhaps even more awe-inspiring is the impact which these two epics have had on the Southeast Asian civilizations. Ruskin Bond is perfectly right when he says of Namita Gokhale’s book, ‘She shows why the Mahabharata is timeless and always relevant.’

Vinod C. Khanna: Like most Indians, knew, from his childhood, Mahabharata from oral renderings and simplified retellings. It was only as ambassador in Indonesia that he read the whole extant text. He has co-authored The Ramayana in Indonesia.