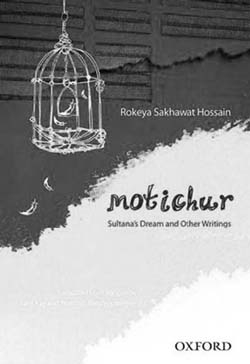 Born in 1880 in the Pairaband village of Rangpur—not Rampur as the volume under review states (p. 269)—a district of eastern Bengal, Rokeya Sakhawat Hossain grew up within the confines of a large upper class Muslim family headed by an orthodox father. Rokeya and her sisters were denied, unlike their brothers, formal education, or any education for that matter. Not only that, even the informal speaking and learning of the Bangla language was heavily discouraged; the English language, needless to say, was completely out of their reach. The family, devoted as it was to the cultivation of high Islamic culture, mainly used the Urdu language at home, and Arabic remained restricted to the pages of the Quran. In fact, no justice was done to the Quran either, for it was memorized and recited by Rokeya and her sisters without any meaningful understanding. In short, no language was encouraged to be seriously learnt and studied by the girls of the family. The Bangla (and English) language, in particular, was the most despised as it was considered inferior, and above all, un-Islamic.