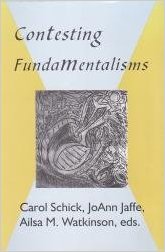 The volume under review is a product of the intense debate on fundamentalism generated by the events of 9/11 in the US. Written by a group of scholars from Canada, its aim is to analyse not only “Islamic fundamentalism” to which much attention has been devoted, but to go beyond and to explore the meaning of fundamentalism so as to give it theoretical precision; and second, to work towards a project for contesting the claims of fundamentalism. Interestingly each chapter reflects some personal experience and involvement on the part of the contributors—due to connections with fundamentalist communities—including for some a feeling of vulnerability, which makes the book more than an academic treatise. The editors argue that it has immediate value because of the dangers of increasing violence that fundamentalism poses of which the invasion of Iraq is a significant example and the potential of creating a fascist state as in Europe where an extreme right-wing movement was an essential part of the rise of fascism.