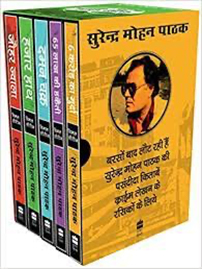 Scroll through the posts on any of a number of Facebook pages dedicated to the Hindi pulp author Surender Mohan Pathak (Surender Mohan Pathak, Surender Mohan Pathak The Legend, Surender Mohan Pathak’s Aficionados, etc.) and you will find an endless stream of photos of men: men reading, men drinking, men posing in front of their bookshelves stuffed with Pathak’s novels and memoirs, men sharing their favourite lines from a novel, men debating about who is the best ‘hero’, men in matching ‘SMP’ T-shirts linking arms at a fan ‘meet’, men smiling and laughing and crowding around Pathak at a book launch or a literary festival. Women are few and far between ‘in these virtual communities’. To consider masculinity in Hindi detective fiction therefore is not only to analyse the heroes and victims and gangsters and investigators that populate its pages, but also to acknowledge the overwhelmingly male readerly public that is constituted through the circulation and appreciation of Pathak’s novels, made evident through the digital performance of fandom.

The passion of this predominantly male readerly public is more than merely performative, however. Vishi Sinha, who moderates the Surender Mohan Pathak… The Legend… Facebook page, has written in Hans that for Pathak’s fans, who mainly live in far-flung small towns and medium-sized cities across the Hindi belt, ‘it is no big deal to travel 100 or 150 kilometers in search of a new novel, and once they have it in their hands they will forego a hundred other tasks—no matter how urgent—in order to read it.’ Indeed, Sinha argues further that popular genre fiction such as Pathak’s is able to do what many a government propaganda effort has not been able to do, which is to inspire young people to read, and specifically to read in Hindi. Through their posts online—at least one page requires that new members post an essay about ‘How I Became an SMPian’—these young readers talk about how they picked up the habit of reading crime novels from their fathers or brothers, or perhaps they discovered them with their college friends. While these men boast of their love for authors like Pathak and Ved Prakash Sharma alongside more ‘literary’ Hindi giants like Gulshan Nanda and Premchand, they also acknowledge that their mothers or wives generally disapprove of their ‘dirty’ habit of novel-reading, alluding to a generic association of popular fiction with a general personal state of dissolution.

Cast a glance at a few Hindi detective novels and it is no surprise that so many mothers and wives may look askance. In an uncharitable reading, the genre’s rootedness in a gritty vernacular aesthetic constructs a limited vision of men as violent misogynists, inviting audiences to identify with their violent desires. The various elements of the vernacular aesthetic of pulpy Hindi detective novels—from the pavements where they are sold to the violently erotic filmi-style cover art to the ironic intermingling of street-style Hindi with highly Sanskritized references to the disposability of women who do not meet Sita-like ideals of purity—all underscore the connectivity between the genre’s colloquial contexts and its narrow imagination of masculinity. For example, Wardi Wala Gunda (A Goon in Uniform, 1992), Ved Prakash Sharma’s bestselling (some say of all-time) Hindi language Jasoosi (detective) novel opens with a vivid description of the corpse of a man murdered by his wife’s lover who has risen from his grave to seek revenge on his murderer. It is a nightmare, one that regularly haunts the sleep of a man, Dayachand, plagued by guilt and fear after murdering his lover’s husband. When he wakes from this nightmare, the murderous lover seeks help from a corrupt cop Inspector Deshraj, who agrees to plant a bloody knife in the room of a hapless servant whom he then falsely accuses of the murder. Along the way, the corrupt Inspector Deshraj exploits his position of power to harass and assault the accused servant’s wife. This brief summary of the opening chapters of Wardi Wala Gunda suggests the misogyny endemic to many Hindi pulp detective novels. It is easy to see why many understand it as a kind of genre fiction that caters so explicitly to a set of expectations centered on the violent consumption of women’s bodies that it disallows for any nuanced treatment of gender identities or dynamics. One may recall Aravind Adiga’s invocation of the periodical Murder Weekly in his 2008 novel The White Tiger, a magazine sold alongside the ‘cheap novels’ at train station book depots. A single salacious detail about the magazine—the cover image of a ‘woman cowering from her would-be murderer’—a description equally resonant with these same ‘cheap novels’, suggests that their explicit exploitation of sex and violence is what makes them so popular.

But then, sex and violence are everywhere in modern media culture and you usually don’t have to drive 150 km to find it. So what else makes some men’s love for these novels—and their authors—so passionate and enduring? For one thing, jasoosi novels offer a narrative framework for readers to understand the complex social and political landscapes in which they live and work. Upon Ved Prakash Sharma’s death in 2017, ardent fan Nilotpal Mrinal wrote in The Wire, ‘I swear I am grateful to you, Ved sahab, for that novel I read early on—Wardi Wala Gunda. No one but you could warn us about the criminals in uniform at a time when khaki and khadi were all but the same to us.’ Wardiwalagunda remains a common hashtag on Twitter for posts relating to police corruption or violence against civilians, suggesting the ongoing socio-political resonance of the trope.

For his part, Pathak creates characters embroiled in personal, economic, and labour circumstances determined by the challenges of navigating a distinctly urban or semi-urban modernity. One may consider, for example, the wild popularity of Pathak’s most beloved (anti)hero, Vimal, aka Sardar Surendra Singh Sohal, who first appeared in a novel in 1971, and subsequently dozens more, leading Sinha to characterize the entire Vimal oeuvre as a 12,000-page epic. In his memoir, Pathak explains that he wanted to come up with a new hero the like of which Hindi jasoosi fiction had never seen before, ‘a character who becomes embroiled in all kinds of crimes in city after city but who is never caught.’ Though a serial criminal, he is in fact a highly spiritual man gutted by an affair between his wife and his business partner. He commits his crimes under duress (majburi) and because of this his readers develop sympathy and root for him, often seeing their own struggles—with low wages, with corruption, with women—reflected in his. Though Sikh, when the markers of his beard and turban are removed, and the Punjabi inflections lifted from his speech (Pathak is especially skilled in rendering multiple overlapping registers of local vernaculars, it is a particular pleasure of his writing), he becomes an Indian ‘everyman’, taking on over dozens of novels that collectively offer multiple iterations of male identities in which readers may recognize aspects of themselves. In his 1977 novel Painsath Lakh ki Dakaiti (The 65-Lakh Heist, 4th in the Vimal series), he describes his hero’s disguise, ‘With a cap on his head and a pipe in his mouth, no one would realize that this was Surender Singh Sohal from Allahabad, or Vimal Kumar Khanna of Bombay, or Girish Mathur of Madras, or Banwarilal, the tonga-wala from Delhi.’

It is worth contending with and in some cases reading past the thin and primarily consumptive portrayal of women as either victims or temptresses, to think through how a variety of Hindi pulp crime novels so compellingly represent masculinity that they continue to engage such a broad and enthusiastic community of men around a participatory and performative culture of reading specifically. In this era of ubiquitous digital entertainments, this is no small feat.