The Man who Redefined Liberalism 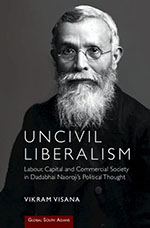 The significance of this book is that it adds to our understanding of Western India and more specifically the milieu of the small Parsi community in Bombay that provided the commercial, political and intellectual matrix out of which the political thought of Dadabhai Naoroji emerged. Visana suggests that in the development of Naoroji’s ideas, ‘Bombay had an especially important role to play since it was the “centre of the best political thought in India”.’ There is a clear contrast with that ‘other locus of colonial criticism’, namely Bengal, in the sense that a wider commercialization provided for a more conducive setting for the emergence of a very distinct kind of political and economic thinking (p. 144). One instance of such thinking was of course, Dadabhai Naoroji’s and it could be included in an impressive list of figures such as MG Ranade and DR Gadgil who set up the Gokhale Institute of Politics and Economics in Pune in 1930.  Visana’s book is exhaustively and conscientiously argued out, retaining very much the scaffolding of the original PhD thesis on which it is based.