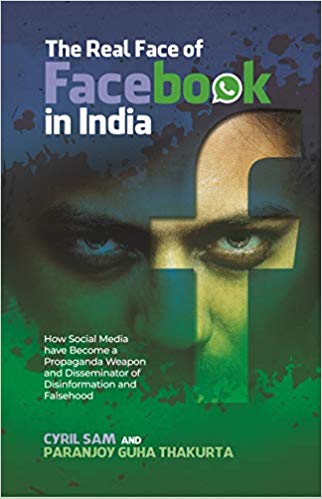 The Majoritarian Social Platform
Mahtab Alam
THE REAL FACE OF FACEBOOK IN INDIA: HOW SOCIAL MEDIA HAVE BECOME A PROPAGANDA WEAPON AND DISSEMINATOR OF MISINFORMATION AND FALSEHOOD by Jamie Susskind Oxford University Press, 2018, 595 pp., 544
December 2019, volume 43, No 12

Mahtab Alam
THE REAL FACE OF FACEBOOK IN INDIA: HOW SOCIAL MEDIA HAVE BECOME A PROPAGANDA WEAPON AND DISSEMINATOR OF MISINFORMATION AND FALSEHOOD
By Cyril Sam and Paranjoy Guha Thakurta
Authors Upfront, 2019, pp. 164, R345.00

In the introduction, the authors promise to provide us a critical examination of ‘how Facebook and its companion platforms—notably WhatsApp—have been complicit in promoting the interests of India’s ruling regime and its Right-Wing majoritarian social and political agenda.’ The book further claims to have examined ‘how critics of the Modi regime have felt marginalized by the social media platform and its associates.’ Referring to an investigation about Facebook (Delay, Deny and Deflect: How Facebook’s Leaders Fought Through Crisis) published by The New York Times in November 2018, the authors argue that, ‘(W)hile contextualizing Facebook’s international activities, our book focuses on what has happened—and is happening—in India as we complete this manuscript.’

However, after reading through the book, one gets a sense that the authors have largely deviated from what the book set out to explore. Instead of clearly outlining the exact role played by social media platforms and the company and subsidiaries directly related to them, and providing some concrete evidence of the same, the book ends up merely documenting the cases of how Right Wing forces and political parties, especially the BJP, have used these platforms for their ulterior motives and agenda. While the use of social media by political parties, especially Right Wing organizations, is an important subject, the book fails to fulfill its promise of explaining how social media platforms have helped them to do so. It refers to some of the connections (for example, the role of Rajesh Jain and Shivnath Thukral) to show that Facebook and WhatsApp in India have indeed helped the BJP and its associates, but it fails to provide convincing details of the same. That is not to say that Facebook and WhatsApp have not or might not have helped the Right Wing forces, but for a full length book to just relay on these connections is not enough.