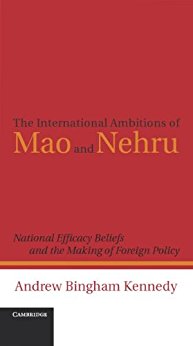 This is the 50th year of the war that China imposed on India in 1962. Was the war itself and the resulting consequences—the effects of which are still with us, not least, in the form of a ‘trust deficit’ in our relations with China—because of Mao’s ‘martial efficacy’ beliefs in contrast to Nehru’s ‘moral efficacy’ beliefs?

The India-China war is one of the cases that the author who teaches international politics at the Australian National University has studied—the others being Korea and Vietnam in the case of Mao and J&K in the case of Nehru. This book is an effort to understand the effect that international structures and leaders have on each other in constraining or creating new realities. If international structures ‘shape and shove’ leaders,—the phrase used by Kenneth Waltz—they, in turn, have the possibility, the author says, of shoving back. His thesis is that ‘national efficacy beliefs’ are ‘convictions about the ability of one’s state to accomplish specific military and diplomatic tasks’ even in the face of adverse material power.