The cripple and his Talismans 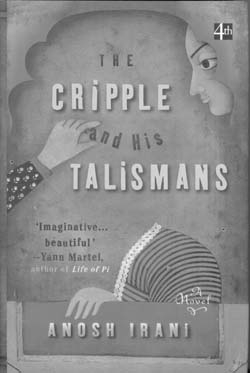 ‘In the beginning there was a little boy’. Irani’s novel starts on a promising note, but very soon we are caught up in the web of uncertainties and confusion that make the book a unique attempt at an allegory. This boy must lose an arm because we are introduced to a man in the next chapter with only one arm. How he manages this awful deprivation is the confusing part. The little boy was last seen standing alone in the universe with everything dark and quiet, creating many living forms. Having directed the many forms of creation around him: Man, Woman, Snake, Tiger et al to use their limbs wisely, he then itemizes for them the three main paths of life, the paths he had created from the limbs of a tree: the crooked path; the straight path; and the path ‘that has the possibility of flying’. The boy directs them to choose between the three paths of life with equal deliberation, and when they do, he finds that the one straight path that ‘leads only to me’ is not selected by any of the forms of creation, and in doing so, or not doing so, the forms had cut off a limb that must have atrophied due to lack of usage. When we meet the one-armed man in the next chapter a connection is made, but the confusion remains.