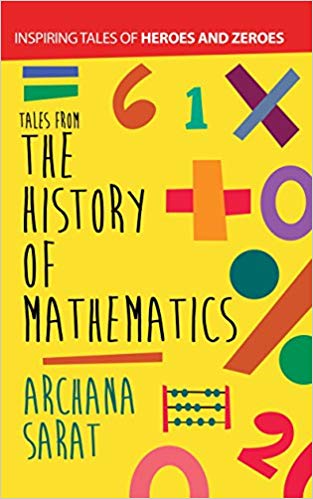 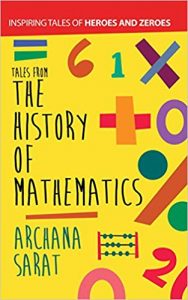 If there is one subject that evokes strong feelings for any student, it is Mathematics. Simply uttering the word ‘Maths’ is enough for someone to claim that they love the subject or more often, how much they hated Maths in school. But irrespective of one’s attitude towards Maths, Tales from The History of Mathematics by Archana Sarat is a book that will appeal to readers of all ages and preferences. One can even go as far to say that it might renew an interest in Maths for someone who has given up hope.

‘We are all mathematicians’, declares the author in the introduction and she goes on to prove this sentiment in the myriad stories that follow. The book is a compilation of short stories that run a fine line between fiction and non-fiction. Some stories talk about fictional characters, but they are placed in historical settings like the Indus Valley Civilization or Sparta of ancient Greece, which gives a very authentic look. Some stories are folk tales, while some describe the lives of notable mathematicians like Euclid and Pythagoras. The sheer variety of these tales makes for a very informative and entertaining read.

To think that Sarat’s book is limited to Mathematics would be a mistake. As the title suggests, there is another subject deeply integrated within this book, History. Most tales are supplemented by an explanatory ‘Know More’ section outlining the factual premise of the chapter. Here, the author explains how Maths was being used in ancient times and how it has developed by giving the background of the tale, the extent of fictionalization, the tools of use and other historical details. The author takes the reader around the world with stories panning Swaziland in Africa, ancient Mesopotamia in Western Asia, the Inca civilization of South America, ancient Greece, Arabia and of course, the source of various significant mathematical discoveries, ancient India.

A book about the history of Mathematics would be incomplete without India’s contribution to the subject. India is the land where zero was discovered and used in calculations, where the decimal system was developed and where different digits were formulated to denote different numbers, thus giving shape to Maths in its present day, easy to calculate form. These discoveries are revealed in the form of entertaining stories along with accounts of brilliant Indian mathematicians like Brahmagupta, Bhaskara I and Aryabhatta. Extensive descriptions about the mathematical and technological advancements of Harappan civilization and Vedic geometry given in the ancient text of Sulbasutras further demonstrates India’s mathematical prowess.

Another defining feature of the book is the way the author has described famous mathematicians like Archimedes and Fibonacci. The author has researched their lives and discoveries and written simple accounts in an easy to read, understandable manner. These accounts are bound to be the most absorbing tales of the book, especially for young readers. The chapters on Hypatia, the first woman mathematician of the world, are very inspiring as they show how gender never was and never should be a barrier to education. An interest in a particular subject is something natural and should be encouraged in a child, regardless of gender. If Hypatia can do it in the 4th century, then what’s stopping girls from becoming mathematicians in the 21st century?

The book has a very simple and lucid narration. It is not heavy with illustrations but most chapters are supplemented with simple drawings, especially when there is a need to give a clearer picture of a specific object, shape or building. Further, diagrams are used to better substantiate proofs of mathematical theorems in a plain, uncomplicated manner. The book includes easy exercises and some tips and tricks for quick calculations that have been in use since centuries.

In her stories, Archana Sarat has mentioned sensitive issues like instances of war, murder, slavery and gender disparity, in a straightforward way to inform young readers of the reality but taking deliberate care not to misguide them. The stories in this book make for an engaging collection, showing the crucial role that Maths has played in simplifying our everyday life and how different people and civilizations have contributed to our universal knowledge. This book shows how Maths has crossed cultural, social and regional barriers and how it will further contribute to the growth of humanity, when future generations would build upon these foundations, laid down since ancient times.

Ilika Trivedi is a student of Human Rights in Jamia Millia Islamia.