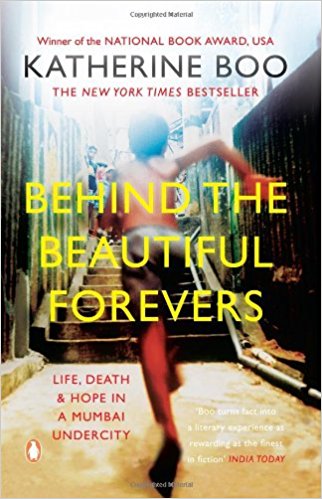 That Intractable Miasma
Subarno Chattarji
BEHIND THE BEAUTIFUL FOREVERS: LIFE, DEATH AND HOPE IN A MUMBAI UNDERCITY by Katherine Boo Penguin, 2012, 254 pp., 499
December 2012, volume 36, No 12

Despite its corny title taken, as Boo and her innumerable reviewers highlight, from an advertising hoarding, Behind the Beautiful Forevers combines fieldwork, ethnography, journalism, and literary flair to devastating effect.1 This effect is perhaps evi-dent in the largely laudatory reviews and more so in the density of descriptors that Boo em-ploys—the journalistic eye for detail—to bring Annawadi and its inhabitants to the attention of readers. For readers of English in India (and, one suspects, readers in the upwardly mobile ‘vernacular’ language sectors) poverty is both ubiquitous and inconvenient, a miasma con-taminating middle class spaces and desires. As Boo writes, ‘For among the things that break-neck globalization was changing about India was its sensitivity about slums’ (p. 42).

The ‘sensitivity’ translates not into deep structural policy changes to alleviate poverty (government poverty alleviation schemes abound and sustain a parallel corrupt economy) but to an aggressive moralizing (the poor are poor because they are lazy, thieving etc.) and justification of wealth manifested in islands of prosperity that keep the sights and smells of the poor at bay. As global capital moves in (and out) of India the relation between capital and labour impact adversely and disproportionately on the poor. The global recession that began in 2008 is perhaps the best example of the manner in which the shenanigans of finance capital and banks led to the further impoverishment and disempowerment of the poor in terms of un-employment, food prices, and nutritional indi-ces. That these processes are normativized is part of Boo’s critique of globalization and in India, as she repeatedly highlights, the normali-zing of extreme deprivation is intermeshed with a system that is corrupt on the one hand and a middle/upper-class that is increasingly innocent of a social conscience on the other.