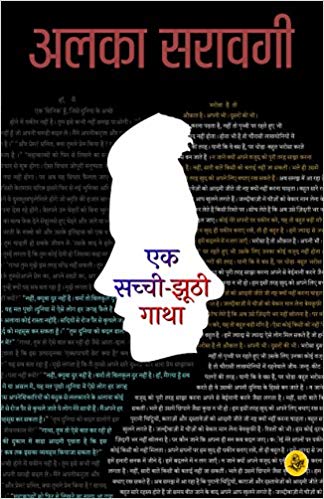 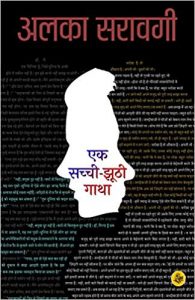 Alka Saraogi’s latest novel is a poignant, layered and textured twenty-first century love story which examines the nature of illusion and reality—especially in the virtual world—appearances, violence, vulnerability and torment. It is the record of an interaction between a man and a woman who meet in cyberspace and the unexpected journey of discovery that Gatha, the female protagonist embarks upon.  Without preaching in any way and in prose which is crisp, direct and admirably suited to the context of the tale, Saraogi raises profound questions about ethics, morality, identity and its components as well as the complex world of human interaction and relationships and how they are being forged anew through new and varied modes of communication as well as the ramifications of such interactions.

The conversations between the protagonists raise questions about who we are, what we do and how we hope to achieve those ends. The basic dichotomy between a physical or corporeal existence and a virtual or digital one are brought into sharp focus. What are the effects of our actions in the real and digital worlds? Do they spread far beyond space and time? It is also a profoundly political novel without, perhaps, intending to be so and achieves this by forcing the reader to take an interest in, empathizing   even questioning all that Pramit Sanyal (the male protagonist) has to say.  Saraogi, who is a consummate storyteller with a keen ear for dialogue, avoids the clichés which are all too familiar when dealing with subjects of this nature, and instead finds a way to move beyond existing forms and conventions of the novel and in doing so, takes a position which is entirely non-judgemental.

This is also the story of an intelligent woman wrestling with her emotions and interpreting situations, figures and conflicts through the prism of contemporary life. Identity and power, the ways and means of taking action, the struggle with ideas and ideals, the need to fight, are all fundamental to this tale. This is not a novel which offers solutions. Instead, in a deeply introspective and often dead-pan manner it raises questions about loneliness and isolation, myths and mythmaking, and, for better or worse, the nature of attraction. It is a psychologically rich and articulate expression of a journey which is profoundly romantic but also intellectual. The terrifying abyss of revolutionary upheaval towards which Pramit seemingly leads Gatha exists at the intersection of public issues and private lives and it is this point which is of crucial significance as is beautifully and touchingly demonstrated in the joint-dream.

This is confrontational and socially-engaged writing of a kind which is rare to come across anywhere, perhaps more so in the world of contemporary Hindi literature. The flamboyant and utterly unreliable Pramit Sanyal is an excellent voice for expressing some of the vital conflicts of the present day and an antidote to suburban realism or middle-class angst with far too much emphasis on craft and personal experiences which are some of the mainstays of Hindi fiction. This book draws on several strains to present its variegated plot in a new and lively form.

Ek Sacchi-Jhoothi Gaatha is also, fortunately, free of politically correct morality with sweeping attacks on the usual political enemies pursued in ignorance of historical factors as well as the literary and cultural aspects of expression. Saraogi is not interested in the validity of positions, instead she articulates inner positions, attitudes and even intuitions which are deep and insightful. Her concerns have more to do with formation and formulation rather than evaluation. Whilst the protagonists are clearly sited within a global system premised on enormous inequalities, widespread social fragmentation and very narrow conceptions of self, they are also individuals with a plethora of tools to describe and even assess those stances.

This interface raises some profound questions about the nature of the world we live in and the move from the actual to the ideal. The textured and mediated sensibilities tread carefully between a utopian drive for mastery and scepticism. There is also a great deal of trauma here, authenticity filtered through communication technology, compromised legacies and individualist preoccupations with memory and identity. It is here that Saraogi’s lyrical minimalism comes to the fore. In prose which is marked by brevity of statement, carefully selected detail, the rhythmic and thematic use of silence as well as intense dialogues she presents a profound journey.

While Gatha is personable and credible with a felicitous turn of phrase, Pramit is enigmatic whose constantly vacillating emotions are all about uncertainty and even a form of revulsion. In that sense, this is a novel which is unafraid of getting its hands dirty. Moving and resonant, it is Saraogi’s most universal novel to date and, given its subject matter, startlingly free of sentimentality. It bristles with a quiet energy which makes it a romance of unusual depth and darkness. Well-structured and paced, this is a work of sociological significance. Uncompromisingly heartfelt, it plumbs the depths of self-analysis in which complex people and complex matters are addressed in a lucid and straightforward manner. Amidst all the illusions, betrayals, revelations and repercussions, there is a sense that the writer knows how to build tension and how to release it, moving assuredly through fantasies and veracities, secrets and confessions.

And what of the human heart which has such a crucial role to play? Love and exploitation, the clash between individual needs and the force of circumstance are laid out page after page but there is the satisfying refusal to dramatize or indeed reveal everything. This is deeply engaged as well as engaging and fiction of real quality and verve. Saraogi’s talents as a writer are varied and abundant and this book is no exception in that it is filled with many sparkling passages. In terms of craft, she is a diligent selector of words whose artistic concentration seldom lapses and is never sloppy. Her pithy sentences have subtle cadences that echo all through the narrative.

Over her twenty-year career as a writer, Saraogi’s literary intelligence is all too apparent. She scrupulously avoids anything trite or badly constructed. Her pages are replete with richly observed humanity articulated in precise prose whether observing psychology or external realities. It is this rare ability to marry nuance with precision that makes her novels so energetic and vital. The metaphorical labyrinth of Pramit’s mind is of special significance here: what may or may not have actually occurred; indistinguishable experiences and imaginings, the nature of truth and lies. While reading this novel, readers may well find themselves wishing, whispering and urging the characters to take other courses. The moment-to-moment details where devilry and virtue vie for control of the human soul make one wonder if this interaction will, in any way, rescue or recreate the lives of the protagonists.

Ultimately, Ek Sacchi-Jhooti Gaatha is an audacious, demanding and highly inventive literary work. Rendered with her usual virtuosic precision and deep empathy, it has a distinct and unforgettable voice. At times deliberately exasperating and confusing, it is also daring and once the reader finally starts sorting things out, quite intoxicating.  Delightfully experimental, this is a novel which examines as well as provides complex perspectives on love, friendship, communication in the contemporary world and the ambiguous nature of truth. A thought-provoking insight into modern addictions and the age-old frustrations of the heart.

Anirudh Chari is a cultural critic and curator of visual arts based in Calcutta. He is a regular contributor to several newspapers and periodicals and lectures widely on art and aesthetics.