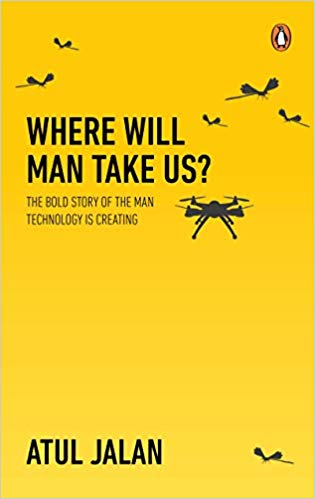 Atul Jalan’s book, with the intriguing title Where Will Man Take Us?  is a thought-provoking exploration of where technology could take us. It raises the perennial question of, ‘Who’ are ‘We’? And, what makes humans ‘human’, and distinct from machines. It shows how man can degenerate into technology if advances in AI are not regulated.

I found Jalan’s account of the state-of-the-art of ‘technology’ very useful. He expands the scope of technology beyond digital communication technologies and AI to include nano-technology and genetics. Combinations of these new technologies, not AI alone, are creating possibilities of transforming industries and human life. Jalan also explains the present stage of development of AI, which is at the stage of ANI (Artificial Narrow Intelligence), with machines exceeding human intelligence in narrow tasks, and with the ability to beat humans in complex games of chess and Go. He says AI may now be entering the realm of AGI (Artificial General Intelligence) where computers will become generally as smart as humans. And he foresees possibilities of AI developing further into ASI (Artificial Super Intelligence), when computers will be smarter than humans.