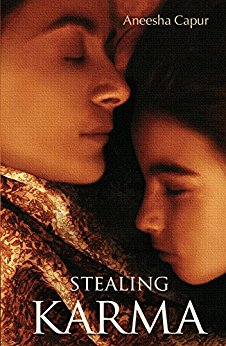 Aneesha Capur’s debut novel Stealing Karma seems to have a fascinating and winning combination. The author is an Indian born, Nairobi bred writer settled in the U.S. She weaves a story of an Indian girl, Mira married to the slightly older Prashant Sharma and living in Nairobi with her baby girl, Shanti. The women’s quest for identity, their struggle for survival and their inner turbulence forms the warp and weft of this fabric. Aneesha Capur in an interview had said, ‘There were two inspirations for the book. One was growing up in Nairobi where, at that time, there was such an eclectic mixture of people in an environment that didn’t have the solid political and economic infrastructure of a first world economy and along with that, there was an absence of a coherent, or even confident sense of self. Things—politically, economically, socially—were in flux and there was such a range of ways people lived that I was exposed to more than I would have been if I’d grown up in the U.S., I think.

The other inspiration was my personal interest in the notion of karma, the idea of choice and its limits, the different interpretations of self-determination versus destiny and ideas of individual versus shared consciousness. But as I have said before in other interviews, these ideas were just starting points. Once I began working on the book, the story, characters, places and events took on its own unique life.’