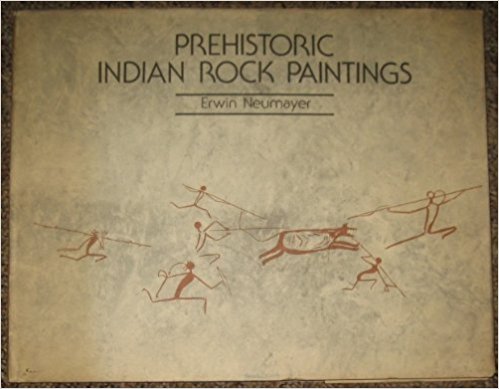 Prehistoric rock painting is one of the more recent arrivals on the Indian archaeo¬logical scene. The present work attempts to synthesize the available information and present a composite picture. The author has visited most of the sites and also had the advantage, as he mentions, of intensive discussions with scholars like Mathapal, Misra and Wakankar who have been active in this particular field for quite some time now. The present work has appeared some half a dozen years after V.S. Wakankar and R.R.R. Brooks published their master¬ly analysis of this art form {Stone Age Paintings of India, 1976). Still earlier, J.P.C. Gupta had published a a fairly exhaustive survey, but in Hindi {Pragaitihasika Bhara¬tiya Chitrakala, 1967). Studies in Indian archaeology in general have also taken note of this branch since the time of D.H. Gordon (Prehistoric Background of Indian Culture, 1958).

The author initially enumerates the different areas from which prehistoric paintings, bruising or etchings have been discover¬ed. Then follows a more or less detailed description of the paintings and their classifica¬tion, based on the themes, techniques, colour-schemes etc. The emphasis of the entire discussion seems to be not so much on the aesthetic merits of these paintings as on their ‘cultural’ content—shapes and sizes of the arrow-heads and bows, methods of hunting etc. In other words, the author attempts to interpret these paintings so as to obtain a glimpse of the cultural milieu in which they came into exis¬tence. The evidence offered by the paintings is, as a rule, meagre; any conclusions drawn on that basis, therefore, are not only sketchy but shaky. One wonders if the author has not read too much into too little.

Apart from this flaw in the approach, there are a couple of things which deserve some comment. First come the chro¬nology and the cultural sequence adopted by the author. He favours the Mesolithic period and culture for the authors of the earliest paintings. Sites and paintings have been labelled accordingly. He also seems to subscribe to the view that the Mesolithic tradition was an ‘imported’ or foreign tradition. In the same section he issues a disclaimer:
The beginning of rock painting art in India can be securely affixed to the time when microtiths came into use, whatever name the authorities eventually settle on for this period.

This sort of statement is cava¬lier, to say the least! If the author feels that it is only a question of a ‘name’ being ‘settled on this period’, his comprehension of the problem would seem to be superficial. But that certainly is not the case, as the descriptions and the rest of the discussion would testify. The inference therefore would naturally be that the author wants to adopt a particular scheme of chronology and cultural sequence without accepting the responsibility of proving its validity: In view of the attri¬bution of the earliest paintings to the Upper Palaeolithic by Wakankar and Brooks and the evidence they have cited to support their contention, it is difficult to accept Neumayer’s view that the art originated with the Mesolithic period. No one today doubts the exis-tence of the Upper Palaeolithic in India, nor is there any ground, except preconceived notions, to hold that the transition from the Upper Palaeolithic to the Mesolithic was the result of the intrusion of some outside agency. The more logical hypothesis would be that the transition was in the form of a gradual evolu¬tion, the entire process being indigenous.

The other point pertains to the presentation of the data. The author has pleaded that photographic reproductions are not capable of doing justice to the paintings or their colour schemes. Anybody who is familiar with the publications on this subject would hesitate to accept this plea. It is the only method of obtaining absolutely faithful reproduc¬tions of the originals. Students of Indian art are familiar with the eye-copies of the Ajanta paintings done during the last century. The variations in line, colour and modelling that are visible in successive attempts are so glaring that it would be almost impossible to accept any of them as faithful repro¬ductions. The case with rock paintings need not be different. It is quite possible, nay, likely, that the personality and skill of the artist doing the eye-copies would lend them an aspect which could alter their basic characteristics. In other words, eye-copies are altered or modified versions of the originals, and this defect is fatal to presentation of scienti¬fic data.

The work would be useful to students of Indian pre-history and pre-historic rock paintings more for its presentation of the latest information on the paintings and associated archa¬eological excavations than for its approach and conclusions.