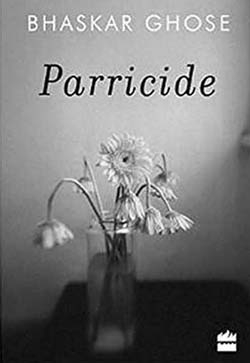 Parricide is Bhaskar Ghose’s second novel. His first novel The Teller of Tales was published in 2012. Parricide narrates the story of a young man’s journey from deep seated hatred for his father to his eventual forgiveness and acceptance of him.

The protagonist of the story is Ravi, whose troubled relationship with his abusive father governs his life, career and subsequent relationships. Estranged from his father for five years, Ravi works as a successful copywriter in an advertisement agency in Delhi. One day, he gets summons from home and is told that his father is on his deathbed. Ravi struggles but eventually, reluctantly, agrees to pay a visit to his father, if only to see him die and possibly derive satisfaction out of his death. As he takes his journey back home, a series of flashbacks get triggered and he recounts his abusive and violent past which is chiefly responsible for his revulsion for his father. What is it that makes Ravi so bitter towards his father? What dark secrets lie between the two? I am not going to play the spoiler, read for yourself to find out.
However, Ravi’s father does die and Ravi thinks that he is responsible for his father’s death. In his father’s death, Ravi feels that the proverbial ‘ghost was laid’ (p. 74), but it does not seem to be quite so. His father’s death hardly brings a closure for Ravi, even though it is assumed early on in the novel that ‘the monster was dying, and Ravi, by living on, will triumph’ (p. 4). On the contrary, his father’s death sets in a strange void, an emotional vacuum in Ravi which keeps disrupting his daily existence and Ravi finds himself drifting.
Through the course of the novel, with help from his work associate Alok, his friend Hitesh, his uncle (Mamaji) Arvind Tandon, who is almost a surrogate father figure to Ravi, and lover Moya, Ravi overcomes his deep loathing for his father, is able to exorcise his bitterness and hatred for him, and is eventually able to forgive him. They, in their own ways, become the means to lay Ravi’s ‘past memories to rest’ (p. 271).
The novel also dwells on Ravi’s failed relationships, with Shyama, his ex-wife, with Alison, his co-student at the University of Oxford, and later with Payal, a budding novelist. Talking of Payal, an interesting comment offered on Payal’s novel is that it does not try to sell India, which also pretty much holds true for Bhaskar Ghose’s own novelistic enterprise.
Parricide is a well written novel, with finely etched out characters. The characters, particularly Ravi, are portrayed with care, compassion and sensitivity. Notably, though the subject matter of the novel is rather grim and serious, dealing with issues of abuse, pain, hatred etc., the writing in itself is not heavy. In fact, it makes for a rather pleasant and enjoyable read, with the author having taken pains to sprinkle the novel with wit, humour and a fair share of light moments.
Simi Malhotra is Professor at the Department of English, Jamia Millia Islamia, New Delhi.