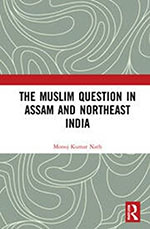 Muslims in Assam comprise one-third of its population. Since Independence, the politics of Assam has been shaped by the question of alleged illegal immigration from erstwhile East Pakistan. The spectre of an illegal immigrant minoritizing the ‘khilonjia’(original inhabitants) of Assam has been a constant in the popular as well as political discourse. Monoj Kumar Nath’s book The Muslim Question in Assam and Northeast India is the latest addition to the body of work which deals with the issue.

The author raises some issues in the introduction that he claims to have dealt with in the book. He tries to understand the political and cultural choices of the Muslims of East Bengal origin. The Muslims of East Bengal origin initially aligned with the Assamese people and made a conscious choice while opting for Assamese language. While this played a crucial role during the language movement, the latter years especially post Assam Movement (1985) saw a growing disillusionment amongst the community. The author tries to understand this alienation that the community faced and the choices they made.

Comprising five chapters, the book starts with understanding the impact of colonial policies which focused on revenue generation. The demand for increased food because of growing tea plantations, the availability of fallow land encouraged the British to bring peasants from erstwhile East Bengal. The push factor was a harrowing exploitative Zamindari system prevalent there. The British initially exempted land revenue and even laid down train tracks to ease communication. This increased the population of Muslims in various parts of Assam exponentially. To assuage the local political leaders, the British introduced the Line System in 1916 to ensure that land is not passed to the East Bengali Muslims. However, this system was never properly implemented.

The post-Independence period saw the Muslims being hostage to Indo-Pak relations especially Pakistan’s treatment of its minorities. Left with no credible middle class and political leadership, the Muslims aligned with the Indian National Congress and opted for cultural freedom and rights in place of political rights. In Assam and the North Eastern region, the Muslim question was shaped by the close proximity to erstwhile East Pakistan. This book situates this issue in the regional political context.

From the very beginning Nath dispels the notion of a homogenous Muslim community. He acknowledges the fact that Muslims entered Assam in different waves and they came bearing their own cultural characteristics. While some came as invaders, many artisan communities like the Sandars or Hooliyas came from neighbouring Bengal for trade. It was only during the colonial period that a huge wave of migration became evident from East Bengal. Unlike other parts of India, the neo-Vaishnavite movement countered  any mass conversion to Islam. A majority of the Muslims of Assam were those who were imported from other parts of undivided India.

The first few decades of Independence saw the Muslims of East Bengal origin align with Congress. The Muslim League Party which rose to prominence post-1937 with the inclusion of Sir Saadullah lost its support base after Independence. Instead of looking for a separate political and cultural space, the Muslims of East Bengal origin newly termed as Neo-Assamese aligned with the Assamese people and opted for Assamese as their mother tongue.

Another defining moment in the politics of the State is the Assam Movement. The movement was preceded by a period of political instability. The Janata Government under the Golap Borbora faced a lot of political opposition in the State. It was also the time when a bye-election was scheduled for the Mangaldoi constituency. This led to a huge uproar as the All Assam Students Union (AASU) accused that illegal immigrants have been included in the updated electoral roll. While the movement clearly demanded that all illegal immigrants should be expelled, there was a tendency to communalize the movement.

Right-Wing political organizations including ABVP and RSS extended support to the Party while the Jamiat led by Madani opposed it. Nath has given a detailed account of the activities undertaken by Right-Wing organizations as well as political leaders like Atal Bihari Vajpayee in support of the movement. The Movement saw further communal polarization with the formation of All Assam Minority Students Union (AAMSU) which became a stakeholder and started negotiating with the Government.

Amidst this turmoil, the 1983 elections were held. While the mainstream Assamese society led by AASU staunchly boycotted the elections, the Muslims of East Bengal origin participated in the elections. This led to an outburst of violence and the worst of it occurred in Nellie. Almost 3000 women and children were killed. This incident further alienated Muslims from the Movement. The polarization did not stop with the end of the Movement. The 1985 elections witnessed a manifestation of this polarization. While the newly formed Asom Gana Parishad (AGP) formed the government, the United Minority Front (UMF) which claimed to represent the Bengali Hindus and Muslims won 17 seats.

The post-Accord period saw vote bank politics emerge. While the newly-formed AGP could not deliver on many fronts and the State soon elected the Congress back, Muslims felt the need to rally behind a Party that would safeguard its interests. Congress continued to communalize the foreigner issue and use Muslims as vote bank while depriving the community of genuine development. Nath deals with the socio-economic condition of Muslims and shows that the community continued to lag behind on important markers of development.

It was in 2005 with the scrapping of the IM (DT) Act, that the Muslims felt abandoned and the strong need of an alternate political patron. This vacuum was filled by the newly-formed All India United Democratic Front (AIUDF) with Badruddin Ajmal as President. Ajmal is also the President of Assam unit of Jamiat Ulema-e-Hind. This signals a shift to the Jamiat’s role in State politics pointing to an active engagement. However, the last few elections showed that the Muslims have not completely rallied behind AIUDF.  Even Jamiat failed to mobilize Muslims in favour of the Party which continues to be perceived as a Party safeguarding the interest of Muslims of East Bengal origin.

The author further points out that a substantive section of Muslim voters has rallied behind the AIUDF. This consolidation in fact led to a counter-consolidation of Hindu votes and paved the way for the electoral success of BJP.

Monoj Nath’s book fills an important vacuum in the academic works on the Muslim question in Assam. It brings to the forefront the role of religious organizations especially Jamiat in active politics. It also gives an account of the process of systematic alienation of Muslims which led to the emergence of newer strands of identity politics which further created new fissures. These also foreclose an objective evaluation of the developmental deficit that the community suffers from.

Parvin Sultana is currently working as an Assistant Professor in Pramathesh Barua College, Gauripur in Assam. She writes on different socio-political issues in newspapers, magazines and webzines. Her research interests include gender, migration and politics in Northeast India. Apart from teaching, she also organizes awareness programmes about girls’ education in the interior parts of District Dhubri.