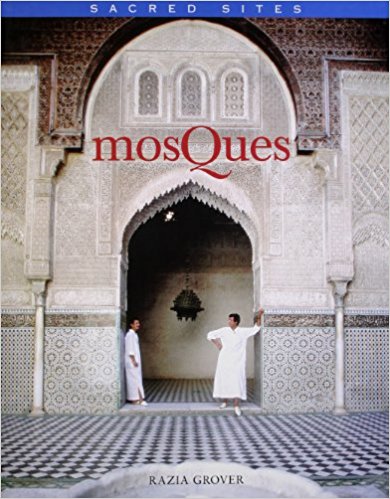 Razia Grover’s Mosques is a generalist’s introduction to the subject, but in the serious tradition of illustrated surveys of art and architecture. Written more for the lay reader than the specialist of Islamic architecture, her effort is commendable for the fact that it emphasizes just how much more difficult it is to write a generally accessible book than a specialist one, picking those moments in a remarkably complicated narrative that would seem exemplary in a field where everything appears notoriously exquisite and representative of extremely attenuated local traditions. Grover’s work is richly foregrounded by what I call the Oleg Grabar school of Islamic art scholarship: what particularly comes to mind, for example, is Thames & Hudson’s scholarly sweep of Islamic art and architecture over the years, each of their books taking years to produce, and all of which serve only to highlight the simplicity, selectivity and economy that Grover brings to her more modest exposition.

The interested reader might consider two generalist works as a foil to Grover’s introduction, the first being Bernard Lewis’s edited volume, The World of Islam, published in 1976, and the second, Daniel Talbot Rice’s Islamic Art, (1965); and two specialist, edited works: George Michell’s Architecture of the Islamic World, (1978), and more recently an ambitious volume of essays co-edited by Martin Frishman and Hasan-Uddin Khan, entitled The Mosque. History, Architectural Development & Regional Diversity, out from T&H in 1994. So then just where, one might ask, is the challenge in producing a generalist book of this sort, and why should one comment upon Grover’s considerable effort? Bernard Lewis’s example is apt, we recall again, because he was so adept at putting things across simply and tastefully in his books: in a world where we tend to complicate matters and lack the skill to reduce an idea to its constituent facts and logic, finding elegance in brevity becomes no easy proposition, something Lewis developed to an art form, and which Grover commendably achieves. Even John D. Hoag’s authoritative Islamic Architecture, now a central introductory text in even undergraduate art history courses in the Islamic tradition, came across (arguably) as being typographically dense, pre-supposing that the reader knew how to ‘read’ a pared-down architectural plan, elevation or sectional drawing, and that the student of art and architecture with little or no knowledge of Islam was facile enough to make the leap between very different geographies and histories of artistic and architectural production. And there was the added problem of designing the content of a book of this nature: should pictures follow words as one crafts one’s narrative, or must words be dependent principally upon one’s choice of illustration?

Grover’s book is fortunately friendly and very readable, and aimed decidedly at the armchair enthusiast. It introduces the neophyte student of Islam to the architecture and organizational structure of the mosque as a building type throughout the Islamic world, completing a documentary project begun by her late husband, Satish Grover, several years earlier; and it is also an indirect comment on the mosque’s place in a rapidly modernizing world, where typology is increasingly being destabilized and abstracted as architects experiment more and more with radical design, revisionist semiology, and shrill sloganeering. The author’s effort, after Satish Grover’s, suggests just how difficult the editorial exercise must have proven; one gets the impression that the author had to wrestle not only with the evidence her husband had amassed (an eclectic collection of slides, text from here and there which would have needed considerable editing), but with deciding how much of the book to leave to description alone, inserting the critical voice strategically so as not to have it detract too much from the book’s introductory scope. Coupled with the prospect of making comparative statements across cultures (sometimes vastly different from India’s, and not just in religious terms), let alone having to choose comparatively from a vast oeuvre on the Islamic mosque type, the book becomes almost an exercise in philosophical deliberation, probably right up to galley production stage.

Mosques begins with a brief, historical introduction to the mosque’s social and architectural development, commenting briefly upon the Prophet Muhammad’s embryonic influence on the shape and function of the first mosque in Medina, going on to briefly describe the socio-religious rationales for mosque space, and then placing the development of the earliest mosques (the Umayyad Dome of the Rock and the Great Mosque in Damascus) within her précis about the historical spread of Islam and its sect-wise divisions.

Each of the book’s nine subsequent chapters considers a geographical area distinguished by its tradition of construction and ornament; first, we are given a glimpse of the two definitive cities of Jerusalem and Damascus, and then a regional selection of highlights from Islam’s architectural record in Africa, Andalusia, ‘West’ and Central Asia, and the Indian subcontinent. There is a descriptive double-spread on Islamic decoration (pp. 100-101), but seeing that it appears as a general insert in a chapter concentrating on Central Asia, its informative words detract from the logic and aesthetics of Grover’s otherwise well-demarcated chapterization. Depth and variation in Islamic decoration could have been discussed more expansively as an entirely separate chapter.

By far the most intriguing—and by that I mean intellectually stimulating—chapter on ‘Contemporary Mosques’ appears at the end of the book, but it falls short of a comprehensive analysis, as though Grover were suddenly faced with the prospect of evaluating not simply modernism’s clash with age-old architectural typologies of building and decoration, but the rumblings of a religion spanning sometimes clashing anthropologies, witnessing shifts in architectural patronage, and reflected in the pathology of new nation-states whose newly-manufactured identity-politics is stridently expressive of an Islam that seems out of place. The author appears to tread gingerly on her own examples to avoid political quicksands, falling back on structuring a narrative around the placement of pictures from very disparate sources (we are treated to mosques in Banda Aceh, then to Visoko, Bosnia, and then to a village mosque in Pakistan, for example). While the discussion of each example is admirably self-contained, the links between these very different, new practices remain tenuous at best, and we are left to question the chapter’s larger thesis. A stronger conclusion might have brought the book’s entire effort to bear on the questions which this sort of book will raise for any student of art and architecture.

Whilst one cannot quibble with the author’s choice of pictures (seeing as they originated in Satish Grover’s research, and carry almost an autobiographical, dare one add emotive, signature), the book’s graphic design calls for comment. In a book where the author is successfully able to essay a hugely complicated story with remarkable economy, the book’s fussy, literal layouts with green accents behind architectural plans and a profusion of unnecessary lines detract from the elegance of many of its stunning pictures and line drawings, otherwise chosen cleverly by the author for the symmetries that they reveal in Islamic structure and surface. Indeed, wittier, more elegant, page compositions, and better photo-processing, might have enhanced the book’s outlook.

This is, of course, an editorial matter, less a problem with the author’s argument, but it points to the importance of applying an elegantly minimalist eye to a project so crucially dependent upon the photograph as focus.

Graphics notwithstanding, Grover’s book is a useful survey of the main arguments in Islamic architectural and social production, and should serve as a particularly welcome addition to an introductory scholarship on the Islamic world. Precisely because it so successfully simplifies matters, this book will be invaluable to the new scholars of Islamic art and architecture.

Azhar Tyabji has degrees in art history, history, and urban planning, and is currently reading for an MPhil in social anthropology at Cambridge University.