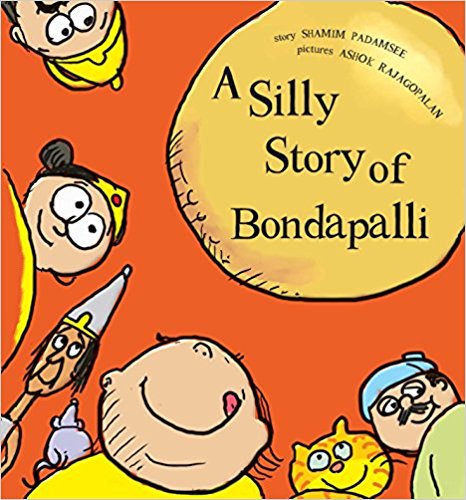 Our bhasha oral traditions are replete with stories which have no purpose except to make children have a hearty laugh, be it about an old woman who scares away a tiger with loud farts or a daughter-in-law who outwits her mother-in-law in cunning but entertaining ways.

But we seem to believe that stories that are written down for children ought to be instructional and contribute towards building character. The stories that get into the curriculum or get recommended as ‘good extra-curricular reading material’ often end with the so-called morals printed in bold at the end, not even allowing the child a chance to draw his or her own inferences. However, generations of children have loved stories like Alice in Wonderland which are enchanting fantasies with no apparent instructional purpose.

Reading A Silly Story of Bondapalli is a delight precisely because the teller of this story is not standing on a high pedestal and teaching the readers any moral lessons. It is simply the story of a young prince who is a fussy eater and is not happy with even the most innovative of the royal cook’s preparations, much to the distress of the king and the queen.

The entire scene changes when the terrified royal cook—who has been told that he has to either conjure up something that the prince likes or lose his head—discovers the bonda quite by accident. The story, from then on, is a roller coaster ride (quite literally!), with the bonda becoming a national dish of sorts. Royals and commoners alike bounce their way through life, even through a war with the jealous neighbouring king with an army of lean and hungry soldiers.

The story by Shamim Padamsee is complemented by the witty and amusing illustrations by Ashok Rajagopalan. Particularly good touches are the rotund ‘James Bonda’ and the Superman with ‘B’ written on his blue-and-read gear.
One might wonder what nutritionists and high priests of healthy eating would have to say about Bondapalli’s national obsession with bondas and the resultant roundness of all citizenry! For once, all such questions should be put aside in the interest of good fun and laughter. But those of us who are never content until we squeeze some moral out of every story could argue that A Silly Story of Bondapalli is a welcome break in an age obsessed with Size Zero and a good thing for the self-image of children who do not fit into such a body stereotype.

The price of this slim volume is steep at Rs. 135, but considering the lengths to which parents go to indulge their little ones, a book that promises fun is not such a bad deal after all.