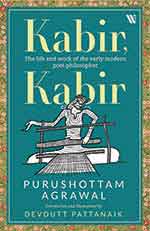 Searching for Meaning of Kabir’s Life and Works for his Times
Rohini Mokashi-Punekar
KABIR, KABIR: THE LIFE AND WORK OF THE EARLY MODERN POET-PHILOSOPHER by Purushottam Agrawal. Introduction and illustrations by Devdutt Pattanaik Westland Publications, 2021, 272 pp., 599.00
Free Review of the Week

The title of this well-researched book, reflecting a life-time’s work, is serendipitous. Mirrored in it is a couplet written by this medieval poet, which also figures as the epigraph:

I have made my mind as pure as Ganga water,

The echoing repetition of Kabir’s name, even more than the plurality which is a quintessential aspect of the cultural memory of this poet, suggests the indefinite and nebulous in the striving for the mystical. In an inversion of hierarchy, it is Hari who runs after Kabir, calling out to his devotee. The title also prepares the ground to understand the mystery of who the poet really was: a Hindu or a Muslim? Did he belong to any sect or did he initiate a new religion? What was it that he preached? Who is the Ram he worshipped if he seemed to have no regard for organized religion, its tenets and practices, or any of the six philosophical schools of the Vedic tradition? This book under review reflects the author’s attempts to examine, through the conceptual prisms suggested above, the figure of Kabir and his poetry.

While not exactly a translation of the original, some of the preoccupations that characterize the earlier book are found reflected here. Agrawal, a renowned Kabir scholar, attempts in this study to engage with the meaning of Kabir’s life and works for his times, and in the process, examines the possibilities of their recuperation in our own. His engagement with Kabir is shot through and mediated by an examination of notions of modernity, and their implications in the context of the practice of faith in the public sphere whether medieval or contemporary. What significance did Kabir, his life, thought and words have for his contemporary world and what meaning do they hold for our own times? Even as the book engages with this historical figure and in the process with issues pertaining to historiography, a substantial part of Agrawal’s preoccupations concerns the majoritarian thrust of contemporary politics, and this overpowering presence of the here and now also shapes his retrieval of the past, and directs to a certain extent, his interest in this poet.

Kabir has always been considered one of India’s most significant poets; however, in recent decades there has been an unprecedented celebration of his unconventional and radical verse. The Kabir-panth and folk singers associated with it have both shaped a popular revival of sorts, as a result of which Kabir is now seen as a kind of folk rebel who defied the tenets of organized religion. He has become the mascot of secularism who attempted, during his own times, to remonstrate with hateful schisms, and whose poetry is today deployed as a demonstration of its intent to build bridges between Hindus and Muslims. The discourse on Kabir in the public sphere of India is an attempt to revive folk syncretic practices and through this to interrogate majoritarian tendencies, and Agrawal’s book must be seen as an important and inalienable part of this discourse.

Agrawal rightly locates Kabir as a radical figure: one who exercised a choice in associating himself with a particular sect and worshiping a formless God; who had contempt for caste practices but called himself a weaver and not a jogi; and who claimed to be neither a Muslim nor a Hindu. The author notes that these are features of an individual critical of orthodoxy and received values, who is in search of a deeper meaning to existence. Questioning categories of the colonial episteme and the methodology of examining early modern figures within the prism of their birth and inherited religion, Agrawal convincingly argues that processes of modernity are also equally to be seen in non-western and medieval contexts. Kabir’s poetry shows that he was familiar with current religious concepts, they present the quest of a restless individual who had the command of his audience, and therefore to continue the discourse of examining him in the well-trodden paths of religious binaries is to do him and his poetry a disservice. Instead, Agrawal finds in this medieval poet modern imagination and spontaneous originality in thinking about social relations and religious aspiration.

One of Agrawal’s central arguments is his assertion that Kabir, far from being a subaltern figure or someone whose attempts to reform religion remained incomplete or unsuccessful, was in fact a popular poet of the trading communities during his own time and in the centuries following his demise. The growth of trade and the increasing significance of the merchant classes, through which Agrawal traces the growth of vernacular modernity in India, led to the growing influence of the Kabir-panth among artisans and traders belonging to present day Chhattisgarh, Bihar and Gujarat. In order to understand this process in its historical chronology, Agrawal prioritizes the necessity of understanding indigenous modernity and of referring to early vernacular sources. While Anantdas and Ramanand find space in his discussion of non-Sanskrit bhasha literature, a reader agog to discover newer leads here finds that she has to be content with a discussion of these well-known figures.

Another lacuna which is bound to show up is the lack of detail in etching the political context of the times; even if it was difficult to establish precise connections, a richer exposition of 15th century Sultanate Benares and a detailed bouquet of voices of the later sants referring to Kabir, would have laid in place a more complexly plotted political and literary scaffolding. From the 1950s, modern Indian historians have explored the phenomenon of urbanization and the urban revolution in northern India during the 13th and 14th centuries. They have attempted to see Benares not only as a sacred religious city and a pilgrimage site, but have highlighted the landscape, the economic-social and political policies that set into motion the dynamics of the city. Agrawal’s very interesting contention about the spurt of trade and the mobility of the artisan community during Kabir’s times would have benefited from a detailed discussion of and connection with historical research on this intriguing aspect.

Finally, as reviewers of his earlier Hindi book have pointed out, there is an inescapable irony in the fact that Agrawal employs critical discourse such as Habermas’s concept of the public sphere, even while he critiques trenchantly the prevalent structures of western and colonial thinking in approaching non-western epistemologies. The examination of 15th century bhakti figures of North India through the lens of Habermas’s concept of the public sphere was welcomed as an exciting and novel introduction of western theoretical categories in the earlier Hindi book. However, though deployed with certain qualifications to suit its non-modern and non-western location, the contradiction it shows up with the author’s asserted ideological position cannot but seem surprising in this English work.

In its totality however, this is an impressive and impassioned book, on a subject of perennial interest for all those engaged with the question of plural religious practice, its expression in spectacularly powerful verse and the continuation of the celebration of historical memory in performative traditions. The continued relevance of such indigenous diversity and its expression in forms of vernacular modernity has immense significance in today’s woefully polarized times.  Kabir’s ironical voice asks all of us inhabiting the here and now: ‘Jo Kabira Kashi marey, Ramhin kaun nihora.’ Who, indeed, will take care of the true Lord, if Kabir were to seek to die in Kashi? It is the living Kabir who quickens the soul of Kashi.

Rohini Mokashi-Punekar is Professor at the Department of Humanities and Social Sciences, Indian Institute of Technology Guwahati. She is the author of On the Threshold: Songs of Chokhamela (Altamira Press 2005 and The Book Review Literary Trust 2002), Untouchable Saints: An Indian Phenomenon (Manohar 2005) co-edited with Eleanor Zelliot, and Vikram Seth: An Introduction (Cambridge University Press 2008). She is currently engaged in translating medieval Varkari poetry from Marathi, an anthology of which will be published by Penguin in their Black Classics series and Jotirao Phule’s play Tritiya Ratna to be published by Orient BlackSwan.