Schools: On The Road To ‘Zones Of Peace’ 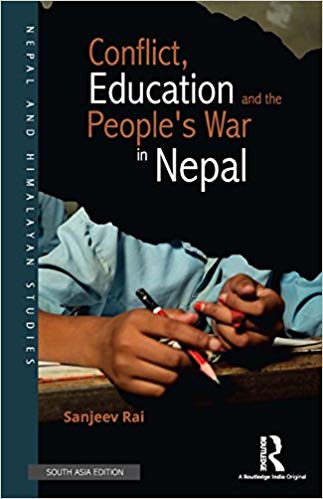 Conflict affects every aspect of human life. In South Asia, the most common lenses through which we understand conflict are ethnicity, religion, caste, gender and so on. It is rather surprising that in a region where conflict remains a dominant part of the socio-political discourse, there has been little attention paid to other dimensions in understanding conflicts. The book under review unravels a dimension of understanding conflict that has been an area of academic and policy neglect so far. Taking Nepal as a case study, Sanjeev Rai explores and explains the role of education in the country’s decade-long Maoist insurgency or the ‘People’s War’ between 1996 and 2006.The book sets for itself the question: ‘Why are schools becoming targets of protests, ethnic clashes or conflicts between state and non-state actors?’(p.11) to understand the complexities of conflicts and with the hope that the study may throw light on ways of preventing occurrence of impending conflicts. Rai discusses the theoretical underpinnings of conflicts and the relationship between conflict and education.

Several studies on the People’s War have attributed the rapid growth of the insurgency to the ability of Maoist leaders to channelize the long pending grievances and discrimination based on geography, language, ethnicity, gender of the people against the ruling elites. Sanjeev Rai provides another perspective into looking at the People’s War by establishing a close relationship between conflict and education. The book argues that the discriminatory education system and lack of quality education were some of the reasons for people to join the Maoist insurgency against the state. The Maoists appropriated this social grievance for its own political struggle. As the book argues ‘… issues related to education were the core of the Maoist strategy to fight against monarchy and ensure political changes’ (p. 100). When the conflict broke out, schools emerged as targets of the warring parties. On the one hand, the Maoists capitalized the narrative that schools are symbols of the discriminatory state. On the other hand, the government saw the school as its last outpost to perpetuate its control.

The book sketches the history of education in Nepal to demonstrate how the prolonged discriminatory education system of the ruling elites became a tool in the hands of the Maoists to hit back at the system. As the book points out, Nepal’s traditional social stratifications reflected in the education sector with the ruling elites invariably dominating the education field, whereas the oppressed sections denied access to education. Rai discusses in detail the question why schools in remote villages of Nepal emerged as ‘strategic spaces’ for the warring parties. He observes that ‘the safest places for security forces as well as Maoists’ were the school buildings and they both ‘used the schools spaces to conduct meetings, to recruit new cadres and to hide out and store arms and ammunitions’(p.88). Students and teachers played their parts in the conflict as ‘supporters’ to one of the warring parties and as ‘sufferers’ as they became the targets from both sides of the warring parties.