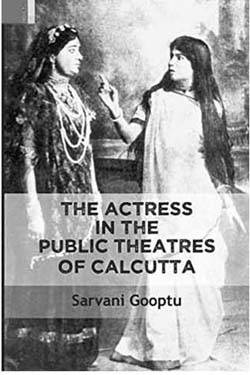 Books on actresses working in the public theatres in India are a rarity and in that sense Sarvani Gooptu’s The Actress in the Public Theatres of Calcutta is a bit of a novelty. It begins with a premise of tracing the journey of women and their engagement with early theatrical practices in Calcutta. Gooptu attempts to provide readers with anecdotes of the actresses’ professional and personal lives through an examination of a variety of themes, the theatres, its plays, audiences and also their complex relationship with their mentors. The book sets the stage for the performance culture of Calcutta, mapping the journey of women and their first appearance on the stage.

1 Performers Jagattarini, Golaap, Elokeshi and Shyama, p. 8.
2 Introduction xx.
3 Bidyasundar was performed at Shyambazar Theatre and actresses Radhamoni, Joy Durga and Rajkumari acted in the female roles. p. 1.
4 It is surprising that Gooptu’s bibliography has missed out Bishnupriya Dutt and Urmimala Sarkar, Engendering Performance: Indian Women Performers In Search of An Identity, Sage Publication, 2010, p. 50.
5 Rimli Bhattacharya, ‘Introduction’ to Binodini Dasi’s My Story and My Life as an Actress, tr. and ed. Rimli Bhattacharya, Kali for Women, New Delhi, 1998, 194.
6 Ibid. 195.
7 Ibid. 195 (emphasis mine).
8 Gooptu 83.
Sarah Rahman Niazi is a PhD candidate at the School of Arts and Aesthetics, Jawaharlal Nehru University. She has worked on questions of identity, female stardom and performance in the Bombay film industry from 1925–47. Currently, she is working on the interactions between cinema and the Urdu public sphere.