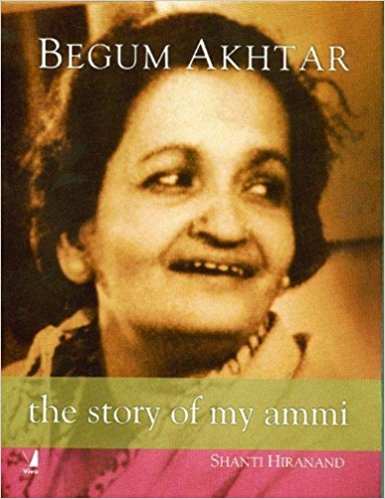 This may be a cliché but Begum Akhtar was like the proverbial shama to which countless parwanas have lost their souls. Stories about her life are legendary and add to the mystique of her musical personality. There is for instance the famous one about a poet in Lucknow driven mad by her music who roamed the streets scrawling her name on walls. Then there is the unconfirmed but widely believed account of her enthronement by the Rampur Nawab and her dramatic escape from the stifling atmosphere of the court and demands of her patron. In the 1950s she emerged as the eminently respectable wife of Ishtiaq Ahmed Ansari a lawyer in Lucknow. Her transformation from Akhtaribai Faizabadi, the famous singer-courtesan to upper class housewife was complete.

It was at this time that young Shanti Hiranand entered the household at 1, Havelock Road. She was an young enthusiast who frequently sang at the Lucknow, AIR. Her producer had suggested that she learn more seriously and that was how she hesitatingly reached Begum Akhtar’s door. Hiranand’s life was transformed by this encounter as her discipleship ensured her a place in Begum Akhtar’s household. This charming, frank and moving memoir of her beloved Ammi gives us an intimate and sometimes vivid glimpse of Begum Akhtar’s personality.

There have been other memoirs too which dwell on other facets of Begum Akhtar’s public and private life. The late Sheila Dhar has a fascinating account about her own troubled devotion in Here’s Someone I Would Like You To Meet which is now available in the omnibus volume Raga’n Josh (Permanent Black, 2005). Rita Kothari’s Bengali reminiscence Bai thekey Begum was published in the literary periodical Desh. Some years ago S.Kalidas produced an excellent documentary that had a range of interviews with her admirers. But Hiranand’s memoir is special. She and Anjali Bannerjee were the only two ganda-bandh shagirds (formally initiated disciples) of Begum Akhtar. This is an insider’s view and therefore all the more valuable.

If on reading this book one gets nostalgic about Begum Akhtar’s music, then luckily loads of it is available and readily. HMV has brought out numerous sets from her old L.P.s. Megaphone of Calcutta has reissued in two albums her early 78 rpms. Live recordings from the 1950s and 60s are also now widely available. Thanks to Kishore Merchant, three volumes of private baithaks from 1957 in Bombay at the residence of his grandfather Khatau Valabhdas have been issued by Sony. Bihaan Records of Calcutta has one from Jnanprakash Ghose’s music circle Jhankar. Doordarshan even has a VCD anthology from its archives. And those who want a glimpse of a younger Begum Akhtar, there is the five minute gem of a sequence in Satyajit Ray’s Jalshaghar (1957).

Hiranand tells us of the varied household in Havelock Road comprising of close and distant relatives and numerous hanger-ons, over all of whom Begum Akhtar presided. Their constant presence was a reminder of her shadowy and hidden past. Jhamman Mamu had been inherited from her mother Mushtri Begum’s establishment. His job was to tell made-up fairy stories and lull the large family to sleep on hot summer nights. There was the demure Shammo, her adopted sister, who was also rumoured to be her daughter. Shammo was married off to many men by Begum Akhtar including her tabla accompanist Munne Khan. Shammo had numerous children by her various husbands on all of whom the childless Begum Akhtar doted. Friends like Benazir and Zohra were from a courtesan family and it was to their home that Begum Akhtar escaped occasionally when eminent musicians like tabla maestro Ahmed Jan Thirakwa visited Lucknow. There was an orgy of singing, drinking and merry making for days on end. Having had her fill, she would return once more to the respectable life of a Begum on Havelock Road. The only educated one in this mad medley was Shama, a cousin by marriage. She was deputed to look after household accounts and later joined a government office. Her husband Ishtiaq Abbasi was aloof and formal but Begum Akhtar enjoyed a coy relationship with him. Apparently he helped her develop a taste for refined Urdu verse.

There are some wonderful stories about her music too. Talim (lessons) from the reclusive Anjanibai Malpekar of the Bhendi Bazar gharana in Bombay where Begum Akhtar picked up the dadra, “Main toh torey damanwa lagi maharaj” (subsequently recorded by Hiranand for the film Dance of the Winds). In fact a fragment of this lesson in Raga Bhairavi has survived on tape and is much sought after by collectors and aficionados. Learning sessions with Gullubhai Jasdanwala the rich stud farm owner and amateur disciple of Alladiya Khan also followed. He taught her the Jaipur-Atrauli speciality Raga Bahaduri Todi. Interactive sessions also with her admirer the Hindi film music composer Madan Mohan whom she playfully accused of lifting her tunes. Another admirer Kumar Gandharva never forgot to visit her home when he came to Lucknow. She even cajoled the serious minded Amir Khan to sing a thumri!

Hiranand candidly narrates her own development as a singer. Her relationship with Begum Akhtar went through many ups and downs especially when other favourite disciples entered the household. There was plenty of sulking and weeping between teacher and disciple but it seems all these made the bonds even firmer. Hiranand is also frank about her marriage. Her husband was both supportive and resentful of Hiranand’s busy career. There are two parallel stories in this book which social historians of music have begun to explore now. One is the domestication of the courtesan tradition and the other is the absorption and legitimization of classical music among the middle classes. Both histories were fraught with tensions where private and the public entangled hopelessly.

The book is well produced but outrageously priced. There are numerous photographs yet none of them are dated or captioned. The allure of photoshop is more than apparent in the numerous sitars and dholaks that are unnecessarily strewn throughout the pages.