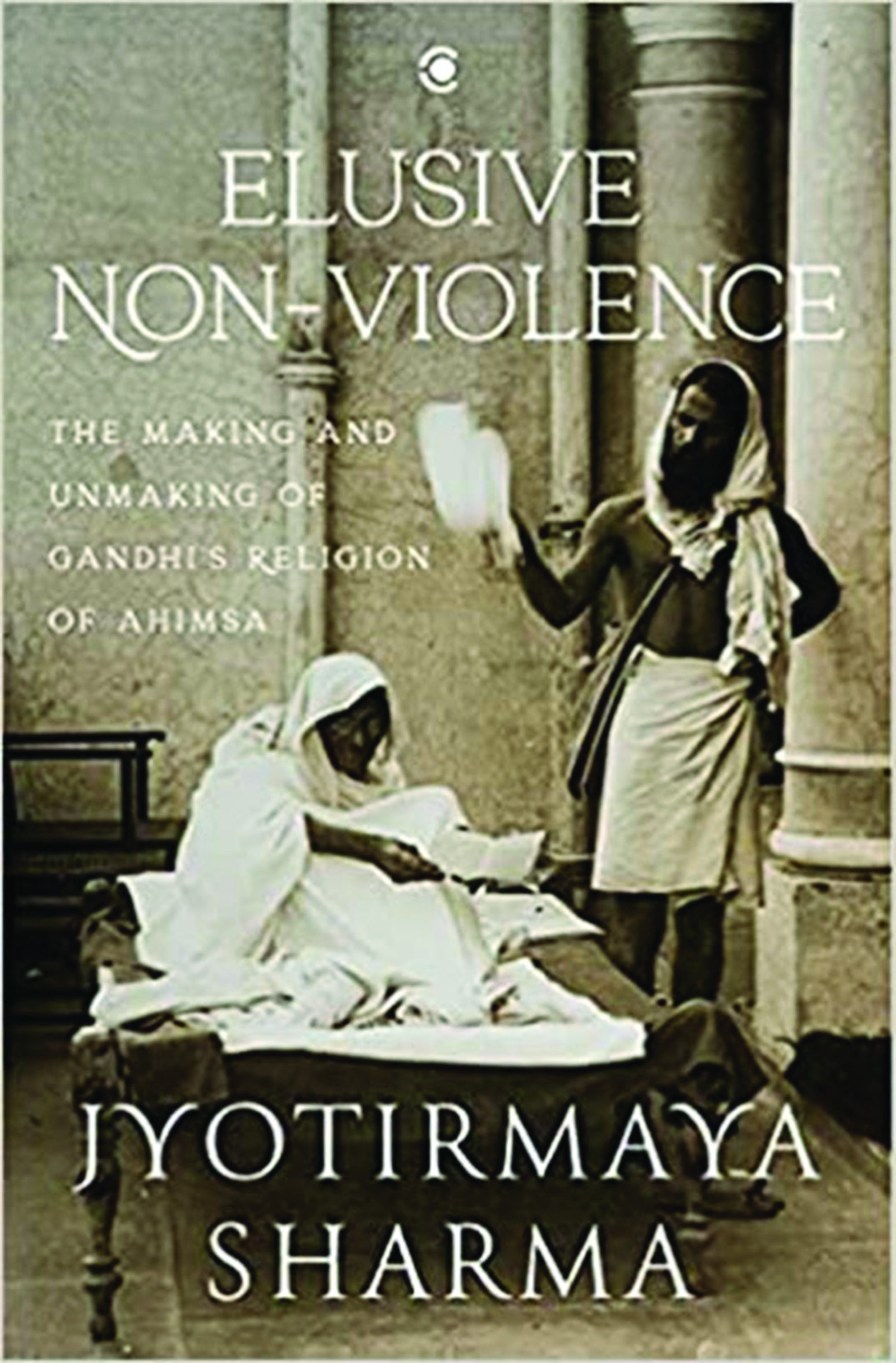 This book is the fourth and last volume in a quartet by Professor Jyotirmaya Sharma, examining the restatement of Hinduism by some of its most influential exponents and thinkers. The first book Hindutva: Exploring the Idea of Hindu Nationalism discusses the thought of Dayanand Saraswati, Sri Aurobindo, Vinayak Damodar Savarkar and Swami Vivekananda, all of whom sought to marshal Hindu identity in the service of nationalism. The subsequent volumes focus on the thought and writings of Golwalkar and Vivekananda. The series is an attempt to look at the question of Hindu identity and the restatement of Hinduism in the late 19th and early 20th century. The author has provocatively argued that there is no distinction between Hinduism and Hindutva, the latter only being the politically dominant form of the former. The book under discussion focuses on Gandhi’s attempt at reforming and reformulating Hinduism.

The book begins with an interesting discussion around the image of Gandhi and his popular appeal. From Barack Obama’s admiration and Winston Churchill’s snide remark to Richard Attenborough’s cinematic representation and the romance around Gandhi in Hindi poetry, the author emphasizes how Gandhi’s image(s) have enjoyed a longer afterlife than his ideas.

Arguing that Gandhi fabricated a tradition of nonviolence, the author seeks to examine the question of violence and nonviolence through a Gandhian prism. Positing Gandhian nonviolence as a tradition bereft of any genealogy, the author points out that ahimsa is a uniquely new idea. He highlights Martin Buber’s searching critique of Gandhian nonviolence and Satyagraha. Buber pointed to the limits of Satyagraha in the context of the Jewish predicament during the Holocaust and also cautioned Gandhi against mixing religion with politics. The Jewish philosopher emphasized how the unconditionality of religion was irreconcilable with the conditionality of the situation of politics (p. 32). Using Buber’s arguments as a point of departure, the author argues that Gandhian ahimsa failed both in theory and practice.

Spread over five chapters, the book not only discusses the contours of Gandhi’s religion of ahimsa but also looks at its implications especially in the sphere of politics. The first chapter, ‘Truth and Non-violence is My Creed’, begins with Gandhi’s response to the assassination of the Arya Samaj leader Swami Shraddhanand by a Muslim named Abdul Rashid. Describing Shraddhanand as a ‘martyr,’ Gandhi terms the assassination as the ‘foul deed of an erring brother’ (p. 65). This case not only tests the limits of Gandhian nonviolence but also serves as an example of Gandhi’s ‘uncompromising allegiance to truth and ahimsa’ (p. 79).

The second chapter, ‘Hinduism is an Ocean into Which All the Rivers Run’,  examines Gandhi’s religious worldview and the interpretation he offers of different religions. Considering Buddhism to be a reformation within Hinduism, Gandhi argues that ahimsa lies at the heart of the Buddhist faith. He also emphasizes equality as the core value of Islam, refusing to see it as a religion of the sword. Gandhi’s view of Islam was also shaped by his preoccupation with Hindu-Muslim unity. As far as Christianity was concerned, he recognized his debt to the Sermon on the Mount and valued Christianity for its positive influence on Hinduism.

The next chapter, ‘Truth and Non-Violence are our Goal’, lies at the heart of the book and analyses how Gandhi’s ahimsa was rooted in his understanding of and attempts at reforming Hinduism. It examines Gandhi’s approach to interpreting Hindu texts and Shastras and the question of untouchability as well as his attempt to make truth and nonviolence the creed of Hinduism.

Chapter 4,  ‘I Shall Expect Non-violence to Arise out of that Chaos’, concerns itself with the efficacy of Gandhi’s religion of ahimsa. Gandhi himself concedes to CF Andrews that as far as nonviolence is concerned, ‘there is no warrant for belief that it has taken deep root among people’ (pp. 179-180). Examining the question of violence and nonviolence further, the author tries to trace and contextualize ahimsa in a number of Hindu scriptures such as the Dharmashastras and Dharmasutras.

The final chapter, ‘In the Life Beyond there is no Himsa or Ahimsa’, analyses Gandhi’s reading of the Gita and the three different texts produced during his lifetime when he extensively commented on it at three different times. The author proposes that these ‘texts offer the most compelling foundation upon which Gandhi’s religion of ahimsa rests’ (p. 213).

Despite its comprehensive treatment and analysis of Gandhi’s idea of ahimsa, the book falls short on a few grounds. Given attempts by scholars like Arvind Sharma in identifying abhaya or fearlessness as a fundamental category in Gandhian thought, one wonders whether postulating ahimsa as constituting the core of Gandhi’s religion is a mistaken venture. Perhaps privileging a core idea as forming the basis of Gandhian thought does not do justice to the gamut of Gandhian ideas which defy easy classification.

The title of the book also brings to mind an exchange between historian Ramachandra Guha and philosopher Ramchandra Gandhi. The former asked if it was possible to follow Gandhi’s empathy for the poor and his insistence on nonviolence while rejecting the Mahatma’s religious idiom. The response of the philosopher is instructive; he said that the attempt to secularize Gandhi was mistaken, as the Mahatma’s religious beliefs could not be divorced from his social and political philosophy. In this respect, the man was the message.

Ramchandra Gandhi’s words are of great value for understanding the book and its argument. The burden of the book is proving that Gandhi’s ahimsa failed because it was cloaked in the idiom of religion. The author points out how ahimsa has thus failed to provide a vocabulary of dissent against contemporary forms of illiberalism. The author, however, does not appreciate how ahimsa was a part of Gandhi’s praxis and was not only an idea for him. In fact, it was praxis which informed Gandhi’s ideas. The author emphasizes how the political was subservient to the religious for Gandhi, excluding the possibility of how the political and the religious were intertwined for the Mahatma.

The author acknowledges that Gandhi’s insistence on nonviolence makes him different from the other reformers of Hinduism. However, by trying to fit Gandhi into his frame of thinkers, the author tends to overlook the radical possibilities immanent in Gandhi’s restatement of Hinduism. Gandhi’s recognition of the polycentric nature of Hinduism and his response to the problem of religious authority is precocious not only in the context of his own times but also from the vantage point of today’s politics. Gandhi thus does not fit in too easily in the constellation of thinkers that the author examines as part of his quartet. Maybe that is why he has been called the ‘Impossible Indian’ by Faisal Devji, underlining how the Mahatma confounds traditional categories of thought, making him almost impossible to classify. Gandhi the thinker cannot be divorced from Gandhi the practitioner. His practices and observances were as central to the making of his Hinduism as his writings.