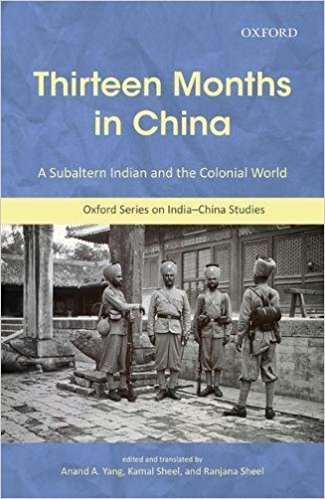 This publication is part of the Oxford Series on India-China Studies which aims to develop interdisciplinary research on historical and contemporary relations between the two countries. In so far as the effort is to bring to light scholarship beyond the current preoccupation with geopolitical issues, Thakur Gadhadhar Singh’s self-published travelogue from 1902 seems, at first glance, an excellent choice. Thakur Gadhadar Singh was a member of the 7th Rajput Regiment mobilized in 1900 as part of the British contingent to fight the Qing dynasty in the wake of the Boxer Uprising in China. Published in Hindi on Singh’s return to India, Chîn Me Terah Mâs, is a catalogue of his experiences and thoughts during the China sojourn.

Gadhadhar Singh is the first to provide a book-length account of travel abroad at the turn of the twentieth century in India. This was when travel writing was beginning to emerge as a genre in Hindi literature, and Gadhadhar Singh was quick to realize the potential of his records of travel. As the editor notes in the Introduction, Singh, although not of the western educated middle class, was different from his contemporaries.

Where hundreds who had served in China did not leave a written record, Singh did. He was educated up to the secondary level and was familiar with English—as evidenced by the use of English in his writing. This is why the translators and the editor chose Singh’s publication—it represents a unique opportunity to glimpse the China of the early 1900s from the perspective of an ordinary soldier in the British Indian Army.