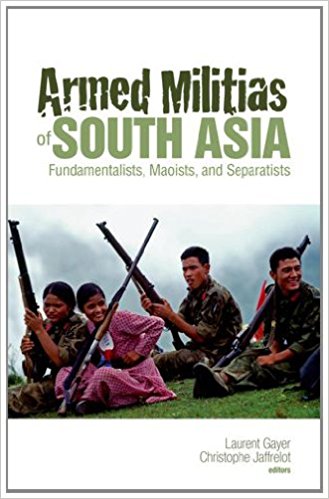 If one goes through all the works of Emile Durkheim, the founder of modern sociology, and German philosopher Fredrich Nietzsche, one would discover that there was little in common in what the two great thinkers said. Except one thing. Both Durkheim and Nietzsche agreed that punitive states were weak states. Laurent Gayer and Christopher Jaffrelot edited Armed Militias of South Asia looks at several players in the region who make the states here both weak and punitive. It is a little known fact that the home to largest number of proscribed groups in the world is not a failed African state or a struggling country in a global ‘hot spot’ but the largest democracy on the planet—India. At last count, the Home Ministry had banned 34 such local organizations who showed no faith in the Constitution and challenged New Delhi through an armed opposition.

Armed Militias shows us through a series of essays that it is no different story in the entire region. Rather than calling them ‘rebels’, ‘terrorists’, ‘freedom fighters’ or ‘militants’, the book makes the useful choice of referring to them as militias. For that is what they are—heavily armed, highly organized groups that in many cases control not just swathes of territory but also run the local administration. It is a tragedy of the times that so much of contemporary history in the subcontinent and the countries around it is seeped in blood. At its very basis, it is a clash of ideas between centralist tendencies of the states and groups that oppose it. It is interesting then that contributors to the book trace complex issues such as philosophy that drives Nepal’s young Maoists. Going deep into Maoist literature, the author dwells upon recurring themes to point out that ethnic factors played a major role in what was dubbed the ‘people’s war’. There is also an interesting discussion of the origin of LTTE and its subsequent rise to being the deadliest armed group in the region. What will especially interest readers is a description of the LTTE’s transnational arms supply network which spawned continents. It is a grim reminder to the level of sophistication many of the militias in the region managed to attain. What is also striking is that so much of the politics that dominates the inter-state relations between countries is plagued by these militias and can be seen through the prism of these non-state actors. Thus there is a useful discussion on the rise of the Hizbul Mujahideen in Kashmir and the manner in which its extremist demagoguery won it more friends in the Pakistani establishment than the local group of Jammu and Kashmir Libetration Front (JKLF) ever could. The colonial past of the countries hangs ominously over the problems they currently face and this is best demonstrated through the discussion of militias in Myanmar, many of which were nurtured as useful political tools by the British and the schisms survive to date. Much that is happening on Pakistan’s border with Afghanistan is well within the awareness zone of most of us and that is why it is good to see Armed Militias concentrate on Sipah-e-Sahaba Pakistan (SSP), one of the oldest radical sectarian organizations in the country. The authors emphasize that each Pakistani government used the SSP to achieve short term goals. This even when secrtarian rift claimed thousands of lives. Whether it is the angst of Mohajirs in Pakistan or the brutal birth of LTTE in Sri Lanka, a close reading of the text reveals opportunities missed by state actors and mindless bloodletting by militias that invariably claim to be fighting for a greater cause. In all this the human cost seems relegated to the background. The book is also a valuable read at a time when much of the region is being spoken of as being on the cusp of the next big economic miracle. The stories coming out in pink newspapers are wholly positive and the riches of the successful urban elite are becoming stuff of legends. Any person swayed by this economic rhetoric will do well to balance his opinion through the existence of such large sections of population which directly challenge the idea of their very own state through extreme forms of violence. The contributors however do not keep themselves confined only to extreme forms of violence which is usually the leitmotif of most of these groups but also pay close attention to Hindu radical groups like the Bajrang Dal. Some may baulk at the inclusion of these outfits with big daddies like the Hizb and LTTE but the point should not be lost. The communal frenzy advocated by these groups, consistent targetting of ‘soft’ minorities like the Christians and insistence on their own brand of cultural nationalism are all factors that were to be found in several nascent militias which went on to achieve bigger status. Whether it be Islamist militias mushrooming in Bangladesh or the Maoists in Nepal, the militarization of the region has been of constant concern. A thread running through all the essays is the birth of these armed groups which immediately militarize what in most cases may be a political or a socio-cultural question. As the economic inequalities in India and its neighbours continue to rise and complex issues like Kashmir get even more muddled, Armed Militias is a good beginning to get an intellectual grip on things. We may then debate how our states should respond and where the hard line ends and the soft begins. In most cases people will be left with an uncomfortable feeling that the militias are their own people who have now picked up weapons against their own ideals and beliefs. Karthikeya Tripathi is a Principal Correspondent with The Times of India in Mumbai and primarily covers court cases involving members of Mumbai’s powerful crime syndicates and trials. Most recently he reported on the trial of Ajmal Amir Kasab, the lone Pakistani gunman caught alive after the 26/11 terror attack on Mumbai.