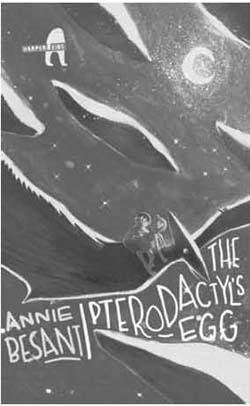 Pterodactyl’s Egg by Annie Besant is a book about a Pterodactyl egg which Sam discovers on the playground and takes home. Little does he expect it to hatch, and what follows is not for the faint hearted!
Sam with his glass bottle bottom like spectacles is an adorable child. Along with Priya, his sister, he somehow manages to convince his mother to let him keep the ‘creature’ for a few days while his father is away on work. The dinosaur grows at an incredible pace and is soon flying. Meanwhile the evil scientist, Dr. Poongothai aka Dr. Pox is fuming in her lair which she has priced away from a tribe— she wants the egg back no matter what. She sends BENO, an agent to recover the creature from Sam and his family.

Not to be mistaken for a rhinoceros, Vishesh Unni Raghunathan is a poet and Chartered Accountant from Chennai. He also owns a DSLR.