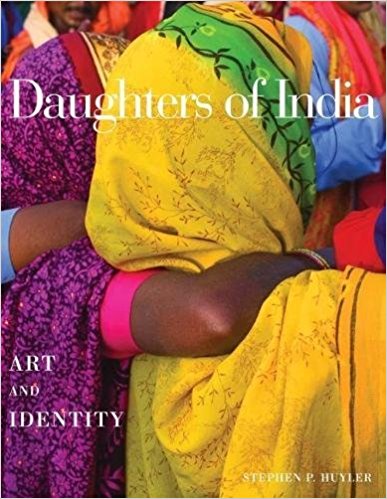 Daughters of India is a collection of profiles of twenty women from diverse communities all over India. It is also a photographic record of artistic activity among these women, ranging from the kolam patterns drawn in front of the house to wall paintings, embroidery and scroll designs. The text of each profile is a sensitive biographic narrative, done keeping in view the dignity of the woman described, while depicting her liveliness, quirks and charm. The author, an anthropologist, is clearly one who respects women in a way that is relatively still uncommon among men. He says as much in his prefatory notes where he describes the importance of strong women in shaping his life and work. This respect is rewarded by some unusual photographic opportunities provided by women who would otherwise remain veiled in male company.

The aim of the book is to provide the world with a view of Indian women (one in every six women in the world are Indian) that opposes common misrepresentations of Indian femininity as tradition bound, subservient and docile. The introduction attempts to lay out the complexity of women’s roles in different Indian cultures, the ambiguity of their status and the textured manner in which communities treat them. This writing does much to undo the bad press that India has received about sati, female infanticide, and bride burning. This said, the book’s narratives are emphatically not whitewash jobs intended to defend Indian attitudes towards women—they are sensitive renderings of the extremely complex cultural patterns that determine gender and authority in India.

The photographic reproductions in the book are of a high quality. They are intended to represent the art of ordinary women in India. The images are a feast to the eye interested in feminine handicraft. Some of the descriptions of the artwork, and I am reminded here of the profiles of the Kutch region of Gujarat, are exemplary in their appreciative articulation of the contemporary history of the art, the ongoing effort and the beauty of the product. There is thus an activism inherent in Huyler’s efforts, going beyond the training of an anthropologist as a neutral viewer of cultures. The stated aim of the book is to function not only as a study, but also as a top-of-the-line advocacy of the art forms and objects produced in different regions. Indeed, as the cover fold indicates, a part of the proceeds of the volume goes to the Global Fund for Women, SEWA and other organizations. There is also an appendix that provides travel information for the visitor interested in pursuing these cultural practices seriously.