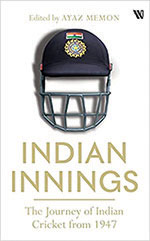 The book under review eloquently encapsulates not only the major achievements of the game but also sheds light on the stalwarts of Indian cricket, their achievements, approaches and vision. In order to carve out the chronology of events, the book has been divided into various sub-sections by the editor on the basis of several epochs of Indian cricket. This has certainly contributed to making it more reader-friendly. Importantly, it has underlined how cricket has become an integral part of Indian social life. Through its ability to capture the imagination of the people, it has succeeded in becoming a game for the masses. The role of the media—print and electronic, has greatly contributed towards this. Additionally, the book brings together memories and conversations of cricket enthusiasts and interviews of eminent Indian cricketers which provide deeper insights on the game. Its discussion of domestic as well as women’s cricket is equally enthralling.

The manner of acculturation of cricket in India and the moments of high-watermark during the 1950s, 60s and the 70s are the focus of the first two sections. This phase witnessed the emergence of cricketing heroes such as MAK Pataudi, Vijay Hazare, Vinoo Mankad and Vijay Merchant. Their sporting prowess helped the team to attain success overseas.

The 70s marked the emergence of world class batsmen such as Sunil Manohar Gavaskar, GR Vishwanath and Dilip Vengsarkar who scored runs against formidable bowling attacks. Besides, Indian spinners played a significant role in bowling out oppositions. Bishen Singh Bedi, Erapalli Prasanna, BS Chandrasekhar and S Venkatraghavan underlined a different form of ‘art’ of the game, thereby contributing in enriching the technical aspect of cricket.

Undoubtedly, the most significant achievement of Indian cricket was the triumph in the Prudential Cricket World Cup in 1983. It succeeded in bringing one of the leading all-rounders of the game, Kapil Dev, into  the limelight.  His 175 not out against Zimbabwe at Tunbridge Wells has become a part of cricketing folklore. Despite being underdogs in the tournament, Indians astonishingly overpowered Clive Lloyd’s mighty West Indies. This success marked the beginning of cricket-dominated sporting culture in India as the game eclipsed other sports such as football and hockey. Cricketers began to make the headlines in the dailies and became larger than life figures. Moreover, the 1983 World Cup heroics brought unprecedented popularity to one-day cricket. It received further impetus with India’s victory in the 1985-86 World Series Cricket held in Australia. Alongside manifesting the emergence of talented players such as Mohammed Azaruddin and L Shivaramakrishnan, Indian cricket came to acknowledge the skills and acumen required to excel in the shorter format of the game. Throughout the 1980s, India played a lot of the limited version of cricket in Sharjah. The (in)famous last ball six by Javed Miandad off Chetan Sharma at this venue is hard to erase from our memories.

The book highlights wonderful developments in Indian cricket since the 1990s and the new millennium. The rise of Sachin Tendulkar and Jagmohan Dalmiya in the domain of cricket and cricket governance respectively have contributed to transforming Indian cricket into a global brand.  The adoption of neoliberal policies by the Indian government also aided the process. The entry of private sports satellite channels revolutionized the realm of cricket broadcasting. The Hero Cup of 1993 was simultaneously televized by Doordarshan (public broadcaster) and Star TV (Majumdar 2018). Dalmiya contributed immensely in projecting Asia as a potent bloc in international cricket governance vis-à-vis the western bloc. Mark Mascarhenas was another eminent business personality who identified the commercial value of Indian cricket.

On the other hand, in twenty-two years, Kapil Dev took Indian cricket to greater heights when he surpassed Sir Richard Hadlee to become the highest wicket taker in Test Match cricket. He set the standard which was later on followed by the premier Indian spinner Anil Kumble. Likewise, Tendulkar’s batting genius blossomed during this period. For cricket experts, his technique was reminiscent of Sir Donald Bradman.

The resumption of Indo-Pakistan bilateral cricket series in 1999 was another major event worth mentioning.  During the Second Test Match, Anil Kumble brought laurels to the country as he equalled Jim Laker by claiming all ten wickets in a Test innings against arch-rival Pakistan at the Feroze Shah Kotla in New Delhi. However, issues of corruption and match-fixing tarnished the image of Indian cricket at the dawn of the new millennium. Nevertheless, the historic Test series win over the ‘invincible’ Australians in 2001 was the first step towards redefining the contours of Indian cricket.

For the first time, a foreign coach, John Wright was appointed to train the Indian cricket team. As cricket became both a national obsession as well as passion, institutions such as National Cricket Academy (NCA) were established to groom promising cricketers. Alongside Tendulkar, Sourav Ganguly, VVS Laxman and Rahul Dravid, players such as Harbhajan Singh, Virender Sehwag, Zaheer Khan, Mohammed Kaif, Yuvraj Singh and MS Dhoni came into the team. With the blend of youth and experience, Indian cricket under Ganguly’s leadership defeated England in the famous NatWest Trophy final at Lords in 2002, became runners-up in the 2003 ICC Cricket World Cup and won over Pakistan in the 2004 friendship series. The first half of the new millennium saw the epic 281 by Laxman (Eden Gardens) and 309 by Sehwag (Multan) in 2001 and 2004 respectively. Interestingly, many players from the otherwise peripheral cricketing centres of the country made it to the international stage.

During this phase, India started winning test matches more frequently overseas.  India’s historic Test series win against England in 2007 amidst the ‘jelly beans’ controversy is hard to overlook. Likewise, the Kumble-led Indian team bounced back after the ‘monkey-gate’ incident in Australia to register a famous victory at Perth in 2008. Barring the Chappell-Ganguly rift, the new millennium gifted Indian cricket its first World Cup since 1983 when MS Dhoni’s men defeated Pakistan in the first World T-20 final at Johannesburg in September 2007. Three years later, India topped the list of Test playing nations and Sachin Tendulkar became the first cricketer to score a double century in one day cricket. The T-20 success enticed the BCCI to initiate the Indian Premier League—IPL in 2008, thereby underlining its financial supremacy. However, the moment of ultimate glory for Team India arrived on 2 April 2011 when MS Dhoni helped India to lift the World Cup after 28 years.

The last three sections of the book cover how Virat Kohli carried the legacy of Sachin Tendulkar. As Dravid, Laxman and Tendulkar hung up their boots, Kohli became the new poster-boy of the game. Also, players such as Cheteshwar Pujara and Rohit Sharma have won India many matches. Post-millennial cricketers are more positive in terms of their approach and temperament as they have to negotiate with the triad of Tests, One-day and T-20 matches.

However, as cricket has ramifications on Indian politics—national and international, the book could have discussed firstly, how active involvement of the Indian Government became evident not only during the Indo-Pak bilateral cricket series in 1999 and 2004 but also in the ban imposing restrictions on playing bilateral cricket series since 2014. Secondly, a discussion regarding the shifting of the 2009 IPL to South Africa in view of the Lok Sabha elections may have also helped to understand how politics and national security affects Indian cricket. Thirdly, muscle flexing by the ruling regime of the country to influence the outcome of the BCCI elections should have been explored more vividly by discussing Sharad Pawar’s ascendency as BCCI supremo. Likewise, former West Bengal Chief Minister Buddhadeb Bhattacharya’s role in backing Prasun Mukherjee, the then Commissioner of Police, West Bengal as the President of the Cricket Association of Bengal (CAB) to overthrow Dalmiya (Bandyopadhyay 2015) further substantiates the involvement of State politics in cricket administration. Nonetheless, the book deserves appreciation for providing a detailed account of the Lodha Commission Report for combating corruption in cricket. Besides, it has chalked out the nature of fan behaviour during cricket matches at the Eden Gardens (Kolkata) and Chepauk (Chennai). This volume will be useful not only for cricket lovers, academicians and journalists, but also for those interested in sports studies.

Majumdar, Boria (2018), Eleven Gods and a Billion Indians: The On and Off the Field Story of Cricket in India and Beyond, New Delhi: Simon & Schuster.