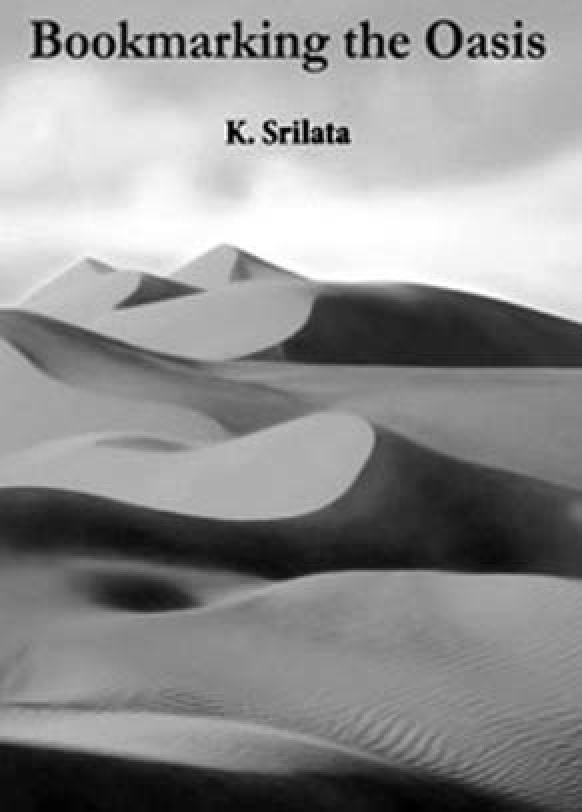 As the household wakes into a day,
this poem
still lingers in the bed I have abandoned.
—‘Lingering’

Writing has made its violent way
into hide, skin, wood and paper
—‘A Brief History of Writing’

These two sets of lines from two dif-ferent poems of K. Srilata’s Bookmarking the Oasis succinctly depict the vast range of experiences and metaphors she employs in her poetry. The collection offers its readers a spectrum of poetry that speaks of history and memory, politics and subjectivity, natural habitats and urban spaces, and the sensuous and cerebral. It brings together poems from her volumes of poetry published earlier in a kind of organized whole that balances the innumerable binaries that come together in her writing. In the short Introduction, ‘The Poet as Her Own Archive’, Ranjit Hoskote writes ‘Srilata’s poems act as entries in a meticulous logbook of encounters with a shapeshifting reality: she testifies to its beauty, but equally to its evanescence’. The ‘logbook’ seems, without any superimposed structure, carefully divided into sections of poems related to different concerns that move the poet and pulsate the rhythms of her poetry.

Yamini is Assistant Professor in the Department of English, Dyal Singh College (M). Her doctoral thesis is titled ‘Idealism, Enchantment and Disenchantment: Changing Ideas of Freedom In the Indian Post-Colonial Context’. Her areas of interest include Postcolonial Literatures, Women’s Writings, Theories on the Novel form, Indian Literatures and Translation Studies.