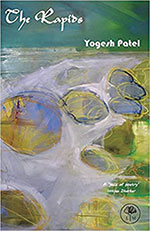 Poems Embracing the Colours of Universal Experiences
Jhilam Chattaraj
THE RAPIDS by Yogesh Patel The London Magazine, 2021, 94 pp., 1432.00
Free Review of the Week

Yogesh Patel’s The Rapids is a collection of brisk poetic thoughts on a range of ideas that reflect on contemporary times. In the age of high-speed internet, data-deluge and fractured communication, Patel is conscious of his stance as a poet. Thus, instead of critiquing the world from an ivory tower, he comes down and invents playful patterns, inspired by everyday disjuncture. He applies tropes from the practical uses of language and turns them into poetry. Patel’s syntax is fragmented, deliberately defiant and a clever assessment of linguistic variations in the context of present culture industries. A seasoned poet, he does to his poems what Facebook, Instagram and Snapchat have done to human communication; a series of information—discernible and useful—broken, but beautiful. Patel aestheticizes the riven lifelines of speech:

Rapids  you’re in are only calm

waters up and down streams

unless you know the destination

A scarecrow keeps  the birds

Out instead    can watch the stars

The Rapids is replete with such unconventional experimentations, and they are arranged alongside poems that evoke the nostalgic desire for the art of writing letters:

All hearts should be Morden Hall Park

where Dora could come every day: cry;

and wait for him

to shield her from a loss or death

to bring her a letter from her Doll

believed to have gone far away.

Such poems affirm the poet’s gaze at the past as an ideal. There is a Keatsian tendency in Patel to search for the ‘Nightingale’ amidst ‘verdurous glooms and winding mossy ways’. However, the reality around is too uncertain to harp upon such romantic longings. Hence, the poet returns to the ways of the fast-paced world that celebrates soft power but is torn apart by cultural wars. He invents his own form alongside tradition. The book is truly, as poet Fiona Sampson writes in the blurb, an unveiling of a ‘vigorous new poetic form, which looks set to give writers and readers pleasure for years to come. What doubles the pleasure is the way these poems bring the human and natural words in together on a single, generous breath.’

The Rapids is also refreshingly undiasporic in its approach. Patel’s reliance upon his ethnic background, culture and language are merely tools to enrich his poetry. He does not display any kind of sentimental return-to-native-land syndrome. It could be due to Patel’s personal, hyphenated identity as a Kenyan-Indian-British citizen. He comes across as a global soul, not a flâneur but a purposeful wanderer ready to embrace the colours of universal experiences. His work is a refreshing addition to South Asian poetry. He departs to a greater extent from hangovers of ‘imaginary homelands’. His English blends seamlessly into Swahili and other languages:

I am glad to be

accepted by the horse chestnuts, limes and planes,

and the embracing vine climbing, light-headed

and rustling, and reminding me

I am just a migrant

in this part of the world.

Therefore, before the fog erases me,

let me sway with the trees

and dance the blast as an oddball;

no one wanting me to be a tree

in this part of the world

The Rapids often seems to evoke a Joycean stream-consciousness. Fluid thoughts flow down the page with beauty and subtlety. The poem, ‘Luminosity’ among a few others is a good example:

to cure the left-over love’s anguish.

On the branches, I see an affectionate ghost

in the shape of a smashed vase

which cannot hold the weight of any bloom

Let me enjoy the luminosity

Poems in The Rapids constantly upgrade themselves, mould into transferrable styles; the poet begins a poem like a modern poet, an oarsman rowing his boat through streams of allusions and then suddenly turns into a metaphysical poet—strikingly dramatic:

the hesitant snow from the Himalayas

runs down as the Ganges

the Yeti swims down laughing

The Rapids will be deeply appreciated by readers who perceive poetry as a horizon, a gateway to an unexplored world; for this as poet Imtiaz Dharker writes, is ‘a jazz of poetry’. Poems in The Rapids are intellectually crafted. They critique the culture they are born into. Patel is not preachy or reformatory; instead, he takes up the role of a cool public intellectual who holds his words like a mirror to society.  The Rapids is Patel’s emotional response to the transient songs of the world; it is taut, philosophic and bereft of sentimentality. The book will be enjoyed by those who prefer a sassy poet; one who does not care for the sacred oracles and laughs at the world like a wise, Shakespearean court jester.