Plurality, Diversity, and Adaptability of the Rāmāyaṇa 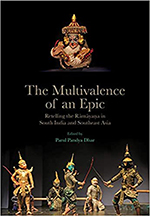 Plurality, Diversity, and Adaptability of the Rāmāyaṇa
Bharati Jagannathan
THE MULTIVALENCE OF AN EPIC: RETELLING THE RĀMĀYAṆA IN SOUTH INDIA AND SOUTHEAST ASIA by Parul Pandya Dhar Manipal University Press, Manipal, 2022, 372 pp., 3000.00
Free Review of the Week

This beautifully produced book brings together twenty diverse essays (including the excellent introduction) on the Ramayana tradition in visual, literary and performance cultures across a broad geographical swathe and across more than a millennium.

In her careful examination of Ramayana-themed sculptures in the Chalukya and Hoysala period temples of Karnataka, Parul Pandya Dhar shows that the image of Rama as ideal ruler is seen from inscriptions of the sixth century onwards where kings are compared to the divine hero. Interestingly, the nobler aspects of Ravana are also occasionally represented.  Dhar’s demonstration of the importance of the Ramayana in the architectural record of the Deccan implicitly challenges Sheldon Pollock’s 1993 formulation that the Rama story came to acquire centrality due to its deployment as a political motif in the wake of the Turkish conquest of North India in the early second millennium. It becomes very evident through Dhar’s analysis, and that of Valérie Gillet and Sharada Srinivasan, that the Rama story’s immense spread was not a consequence of the arrival of political Islam, but that the tale had great currency in the religio-political sphere from the second half of the first millennium itself. Gillet makes a further interesting argument about some sculptural panels of the Vaikunathaperumal and Kailasanatha temples in Kanchipuram mirroring one another. Srinivasan’s essay attempts dating of bronze (and brass) sculptures through iconometric analysis of their chemical composition.

RKK Rajarajan’s essay titled ‘The Ramayana Paintings of Māliruñcolai Temple: Nationalism under the Spell of Regionalism’ identifies the regional roots of the Ramayana story as depicted in the murals of the Māliruñcolai and Tirukokarnam temples. While mapping of the hymns of the Alvars on pictorial representations in Vaishnava temples is an important scholarly exercise, some of the theoretical formulations are, to put it mildly, odd.

The essay tries to identify the ways in which vernacular elements of the tale (i.e., those deriving from Tamil, Bengali, Kannada, Telugu), considered representative of regionalism, agree with or depart from the ‘pan-Indian output, i.e., the Valmiki Ramayana’ (VR), which is termed representative of ‘nationalism’. Nationalism has been a subject of intense scholarly engagement, and cannot be cavalierly applied to this context. The term pan-Indian is certainly more apt, but is unfortunately shadowed by the very title and basic assumption underlying the essay. Similarly questionable is the notion that ‘Indian kings imitated Rāma or Kṛṣṇa in the best administration of the state, broadcasting the idealism of Aśoka…’. Also, it is doubtful if the VR is actually pan-Indian in a real sense, as it has been demonstrated by countless studies that while the basic framework of the Rama story is shared, most of the hundreds of versions across the subcontinent and beyond depart from one another and the VR in significant ways, while continuing, in at least most literary versions, to pay lip-reverence to the VR. Finally, the dating of the Māliruñcolai murals that so richly illustrate the essay is not clearly mentioned anywhere, though we might conjecture that they are contemporaneous with the Nayaka period murals at Tirukokarnam.

In giving a background to the composition of the 15-16th century Malayalam Adhyatma Ramayana Kilipattu by Tuncat Ezhutaccan, AJ Thomas paints a broad history of Kerala; unfortunately, such impressionistic brushwork obscures much that is factual and lends unwarranted credence to ahistorical assumptions and suppositions. Questionable assertions abound: majority of the ordinary people of Kerala had access to Sanskritic texts and knowledge systems till the Nambudiris established a stranglehold on the same by about the 13th century; subalterns were ‘enslaved’; and the Buddhists and Jainas became today’s Ezhavas. A scholarly appraisal of Ezuttachchan’s work is sadly lacking; what we get, instead, is a eulogy.

Another literary work in Malayalam, Kumaran Asan’s Cintāviṣṭayāya Sītā, a philosophical meditation through Sita’s perspective, is the subject of Sudha Gopalakrishnan’s careful translation. It is preceded by a framework that contextualizes the early 20th century poem where she perceptively points out, ‘We have gone in search of Sita, eulogized her…wondered about her, doubted and derided her apparently submissive positions, reinterpreted her character to “empower” her through our own analysis, and dedicated Ramayanas to her. Perhaps a lot of it is about us—what we feel she should have done under the circumstances.’

Paula Richman’s analysis of a Kathakali piece composed in the 18th century and a 20th century Tamil mythological drama masterfully demonstrates how a familiar narrative can change spectacularly when seen from the point of view of another character, in this case, Ravana, who is presented in a sympathetic light in both performance traditions. The circumstances of the origins of these performances are clearly impacted by changing political configurations. Interestingly, Pollock’s argument which, too, sees shifting political power equations as central to the reimagining of the Ramayana around the 12th century seems even less credible when one considers that Pollock argues for the Ramayana as a text of ‘othering’ par compare, with Ravana as the archetypal other, while Richman points out that regional Ramayanas from about that date are increasingly devotional in nature and portray Ravana as gaining salvation through death at the hands of Rama.

Krishna Murthy Hanuru and Purushottam Bilimale discuss different folk productions of the epic tale in Karnataka, the former pointing to the variations from the ur-text of Valmiki and idealization of Hanuman, and the latter analysing the Yaksagana Ramayana to show how each re-enactment continuously recreates the tale.

The essays by John Brockington, Rachel Loizeau, Gauri Parimoo Krishnan, Cheryl Thiruchelvam, Malini Saran and Thomas Hunter focus on the southeast Asian context, while Chirapat Prapandvidya and Mary Brockington trace the linkages between the subcontinent and Thailand and Laos respectively. J Brockington analyses the sculptural record in Cambodia, Vietnam, Java, Burma and Thailand to discover both the time periods when Ramayana themes were featured in each location and which sections of the epic tale were favoured for representation. This is particularly crucial as visual evidence predates the textual in the southeast Asian context. Loizeau shows that sculptured representations are not linear narratives. The vast difference in conception and reception of the epic in different cultural contexts emerges from Parimoo’s study wherein she points out that Buddhist values from the Jatakas have been absorbed by Ramayana characters in the Javanese versions from the Majapahit period onwards, that the Siam and Khmer regions saw a combination of Hindu-Buddhist values, and that post-Islamic revision occurred in Java and Malaysia. Another aspect that emerges from several of these papers is the popularity of the Yuddhakanda across the region. Ghulam-Sarwar Yousof studies the Kelantan shadow play and points out how the stories of Ravana’s origins are entirely different from those familiar in India. Laksmana in Wayang Kulit Kelnatan doesn’t marry—in one version, he is created out of a piece of wood, and is, hence, averse to women, while in another, he is an incarnation of a heavenly nymph in love with Rama who, unable to marry him, is reborn as his brother!

While most of the essays dealing with visual or textual (as against performance) cultures focus on pre-modern materials, Thiruchelvam examines contemporary art work in Malaysia. She points out that the Malaysian Wayang Kulit is an assimilation of numerous Wayang Kulit traditions, from the earliest, 9th century Javanese one to the 15th century Thai and later Indonesian and Cambodian practices. Malini Saran shows that conversations and discourses that highlight the moral component of every action take precedence over lyrical descriptions of natural beauty in the Ramayana Kakawin. Rama’s killing of Tataka, Bali, Marica etc., are debated. Sirang Leng’s analysis of Reamker performance in Cambodia begins with tracing the antiquity of the Ramayana tradition in the region: a 7th century free-standing sculpture of Rama, numerous relief carvings on temples from the pre-Angkor to the Angkor periods, all the way to the Royal Ballet in the 20th century which has an elaborate grammar and symbolic system.

The Multivalence of an Epic is an excellent resource for anyone interested in exploring the richness of the Ramayana tradition, ‘multivalently’ so owing to the lavish illustrations that make this a joy to even merely leaf through. I now want to revisit Karnataka, Kerala and Tamil Nadu to look at the temple sculptures with new eyes, watch Yaksagana and Kathakali with these fresh insights, and eventually travel to southeast Asia on the ‘Ramayana trail’. This feast of a book would tempt anyone!

Bharati Jagannathan teaches History at Miranda House, Delhi University, Delhi, enjoys narrating the Ramayana and watching trees and birds. She has authored an academic monograph and ten books for children. Her collection of short stories, A Spoonful of Curds, was published in 2020 by HarperCollins.