Picture Books for the Young 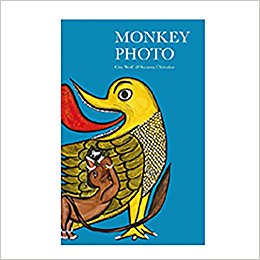 Monkey is tired of the tourists clicking away, each time they visit the jungle. So he decides to monkey around with a camera himself, and manages to find a Polaroid, too!Monkey Photo follows Monkey, as he jumps from tree to tree, swinging here, there and everywhere trying to catch the leopard’s spots, the snakes on the tree, cheery tigers, enthusiastic birds and a host of other creatures that fill the forest with their colourful presence.

Swarna Chitrakar’s artwork is dynamic and amusing. Each page offers a totally new, rich perspective through which the reader can follow Monkey’s trail. Whether he is hanging in mid-air, or toppled upside down, we see the photo, as he is looking at it. Each frame within the frame is eye-catching, and the range of emotions Monkey manages to capture is enviable, indeed!

However, Monkey Photo’s narrative structure, though it begins well enough, lacks the momentum and energy that its artwork has. The rhyme scheme is inconsistent and sometimes, even forced. As a read aloud for children, it would probably work fine, but the text itself is rather drab in contrast with its stunning visuals.

The Churki-Burki Book of Rhyme features the rhyming sisters Churki and Burki, who love singing songs on just about anything. Adapted from Gond artist Durga Bai’s childhood memories of growing up in her village, Patangarh, these rhymes offer a glimpse into a world buzzing with activity: women gathering berries, picking up firewood, fishing, and children playing games old and new.

Particularly fun are the ones about the strange pumpkin that’s not round but long, and the one Churki makes up about a fish and crab, who live on a tree. Once again, this style of text would work better in performance or perhaps as an audio book for children, as some of the rhymes do seem lost in translation.

Durga Bai’s visuals are striking in their detail, and some of them, like that of the women of the village working in the fields, or standing on top of a tree and shaking its branches have the quality of picture puzzles, inviting the reader to look closer at the patchwork of lines and patterns. On the other hand, the typography and layout, while elegant and minimalistic, could have been livelier, given the playfulness of the concept. More interaction between picture and text would have perhaps, made it more child-friendly.[>GPH<]  Most Tara titles manage to do this effectively, so from a design point of view The Churki-Burki Book of Rhyme is less compelling. While child readers find their own ways of engaging and discovering forms of art in books, this picture book is more likely to find its place on a coffee table rather than in their bookshelf.