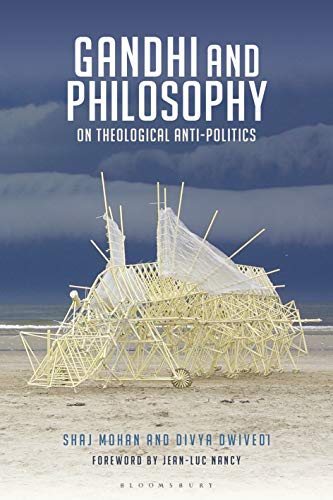 The collected writings of MK Gandhi stretch over a 100 volumes. Prolific even for prolific writers, but for someone so politically active, this is not just phenomenal but incredibly so. Further, there are as many and more volumes about Gandhi’s life and thought, nor does there seem to be an immediate end to the discussion, debate and appropriation that Gandhi is subject to.

Jean-Luc Nancy in his insightful foreword reminds us that Gandhi is ‘at once the emblem of the most important colonial liberation—of an entire subcontinent—and the figure of a radical spiritual exigency for asceticism and freedom from the world’s enslavements… uniting the two dimensions of the spiritual and political…Gandhi represents…the point of maximum intensity which simultaneously puts into question the domination of the West and challenges western civilization as it proceeds towards globalization.’

While almost everything about Gandhi is in the public domain, philosophical engagement with his writings is both welcome and necessary. This book, Nancy writes, ‘aims to orient us…towards a thought, even a world, neither humanist nor reduced to suffering in the name of Truth.’ The word orient is well chosen, because the authors, in engaging with Gandhi’s thought, create their categories, at once descriptive and evaluative, from within Gandhi’s own writings. These neologisms (hypophysics, polynomia, crypsology) may be an impediment at first, but must be thought through patiently as they reorient the thought of the Mahatma.