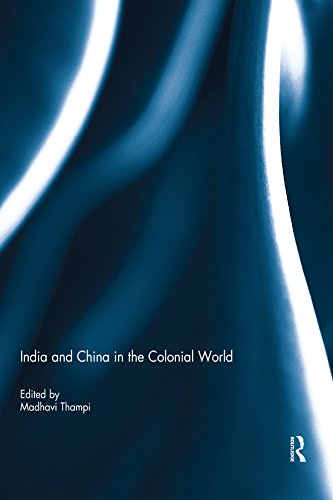 This review does not propose to undertake a taxonomic survey chapter or theme wise. It rather first of all proposes to delineate the underlying issues of common concern and those which distinguish the Chinese from the Indian experience of colonialism. One of the major points underlined by Asiya Siddiqi and Chen Zhilong who have analysed the triangular trade between India, China and Britain as well as the multilateral trade originating from Shanghai is that its cornerstone was the military rule and political control exercised by the colonial powers over India and China and not any commercial comparative advantage. As Asiya Siddiqi points out the Dutch perhaps were the first to resort to inter-Asian trade importing products from one eastern market to another in order to generate trading capital. They used to import textiles from India to Indonesia in order to buy their cargoes of spices by suing the profits derived from the price differential derived from buying cheap and selling dear (p. 23).

The English East India Company followed a similar strategy to buy tea from China by selling opium procured in India forcefully as land revenue in kind or bought at monopoly prices by moneylenders who could be made to sell at low prices to the ruling power. Given the prevalence of drought and famines in some parts of China, opium provided addictive relief. The East India Company estimated that Chinese smokers of opium in 1820 numbered 365,000 in 1835 around two million and in the 1880s approximately 13.3 million daily (p.27).