On a Cinematic Journey 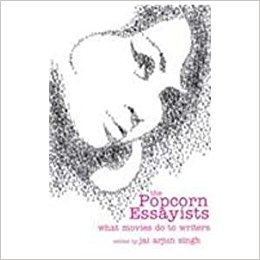 Alfred Hitchcocks Psycho encouraged me to take cinema seriously as an art form with its own methods and a visual language distinct from the words being spoken by the characters on screen writes Jai Arjun Singh in Monsters I Have Known an engaging and expansive essay on the horror films that spoke to him in ways no film scholar could understand. Its a feeling I could immediately connect with. Watching Psycho time and again has not just been about getting scared by the murder of detective Arbogast on the stairs of Norman Batess house but also about appreciating how effortlessly yet artfully Hitchcock was able to weave in themes of materialism and greed into a scary picture. And without really making a big deal of it. Jais reference to the delightfully kooky Arsenic and Old Lace also rang a bell the film in which bodies of a dozen men in the attic could never make the sweet aunts any less loveable.

Its writing like this that works best in the anthology writing thats not just about great use of words but reveals the passion involvement and sincerity of the writer for cinema and simultaneously takes the reader on a cinematic journey of his or her own. Jais monsters made me relive my own long love affair with horror and prompted me to view my favourite horror film Roman Polanskis Rosemarys Baby all over again. ihc-hide-content ihc_mb_type=”block” ihc_mb_who=”unreg” ihc_mb_template=”1″ ]
Any anthology made up of an eclectic set of contributors is quite like a film with multiple narrative strands. Some stories tend to work more than the rest. Similarly here a few essays reach out better than others. And most of those are the ones which live up to Jais own definition of good writing in the introduction: The sort of film writing I like best is the well-written accessible yet thoughtful personal essay that provides an insight into how a particular person might respond to a film which reveals something about the writer too.

My pick of the lot is Manjula Padmanabhans Jellyfish. Her journey into world cinema from being a Hollywood junkie comes with hilarious anecdotes and is narrated in a delightfully witty and irreverent manner. Somewhere it also reminds me of my own leap into serious cinema from hardcore Bollywood masala. Manjula sets up several scenes as though they were straight out of a film: her risking a yawn in the middle of Francois Truffauts 400 Blows watching it steeped in knowledge of films companion B- seeing five films a day with Kiran Nagarkar at the International Film Festival of India in Delhi on someone elses photo ID how Kiran reminded her of her atrocious taste in films. These are people situations and experiences unique to her yet would surely have a universal ring for any film buff. Her details of films be it Charulata or 400 Blows The Godfather or All That Jazz offer a unique perspective. The essay moves on from discussing two actresses playing one role in Bunuels That Obscure Object of Desire to the world of filmmaking sets studios and dubbing. Thats where Manjulas narrative slackens a little but she quickly returns to her own private Fellini filter and Lars Von Triers Dancer In The Dark and alls well all over again for the reader. Meanwhile long after reading the essay I am still reeling under the impact of her description of 400 Blows: The story moves at the pace of an arthritic sloth while packing the punch of a landmine in the gut.

Manil Suris My Life As A Cabaret Dancer narrates his preparations towards and also the aftermath of his homage to Helen. The author danced like her to the song Piya tu ab to aaja at the Brooklyn Book Festival in September 2008 where he was invited to take a risk i.e. perform something on stage that he had never done before. His description and assessment of the persona of Helen may not quite offer any new insights to a Bollywood fan but his path-breaking act narrated with subtle irony and humour does keep you in its grip so much so that you actually feel like cheering him when he comes to realize how energizing and fulfilling the performance proved for him. It was like breaking through a personal barrier reaching deep inside to express a vitality I didnt know I possessed he writes. Many others have as well; all thanks to Helen and Hindi cinema!

Namita Gokhales Super Days takes us to the world of film magazines browsed often at the dentists hairdressers or on a long train journey. Its been our window to the glamorous stars and their mysterious lives till TV took over. Namitas leap from Jesus and Mary College to Super is what she refers to as de-intellectualisation a world far removed from the literary firmament she now inhabits. Its fun to see her capture the lingo of the magazine the exclamation marks and hyperbole the gossip surrounding Rishi Kapoor and Neetu Singh the mythology of Dev Anand the carefree girls Zeenat-Parveen-Shabana Devyani Chaubals obsession with Rajesh Khanna and that bald pate that he used to mask by using black boot polish. A small mistake creeps in. The song Namita quotes is not Mein zindagi ko dhuen mein udata chala gaya ; its Main zindagi ka saath nibhata chala gaya har fikr ko dhuen mein udata chala gaya. However theres much to take back home from the essay specially the sentence: Bollywood stars are not cardboard cut-outs they are chunks of collective consciousness.

Collective consciousness cultural identity and personal history is what Amitava Kumar looks at through the prism of Hindi cinema in the excellent essay Writing My Own Satya. Its about how the author identifies with and sees parallels in the life of Manoj Bajpai the actor who played Bhiku Mhatre in Ram Gopal Varmas Satya. He was born in a village close to Amitavas in Champaran Bihar and went to school in his childhood home townBettiah. For Amitava Manoj Bajpai revealed a talented individuals ability to rise above and escape his origins. Amitavas interactions and interviews with him eventually yield his novel Home Products. Amitavas essay also packs in a long critique of Satyaits use of street lingo of the staple shots and abiding clichs of Hindi cinema how it humanizes gangsters and how it taught him that going back home to Bihar of his boyhood was not easy. And nothing in the book captures the love for cinema better than a couple of sentences from Amitava: There have been moments when I have believed that my primary allegiance is not to India where I was born or the United States where I work but to Hindi films. I am a citizen of the world created by Bollywood. So are many of us.