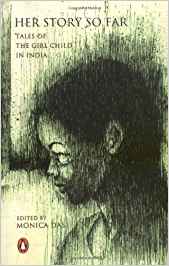 Every successive gender-ratio study reveals the depressing fact that the Indian girl child is well on the way to becoming an extinct variant of the species. So it is heartening to hear her voice through this set of tales edited by Monica Das, who in her introduction sets out the chilling figures which form the painful backdrop to these stories: 30 per cent of the female sex workers in India is below the age of eighteen, 47 per cent of the girl child population of India is malnourished, children account for 19 per cent of the rape victims in the country. Nor do things improve with time; insensibly they worsen, even as India becomes more liberalized and more firmly plugged into the global economy. In the year 2000, selling of girls for prostitution went up by 15.3 per cent, female foeticide by 49.2 per cent and female infanticide by 19.5 percent. Starkly horrifying as they are, these figures are statistics to which the urban Indian has become callously inured over the years. After all, yawns the new breed of mall-crawling, well-heeled Indian, aren’t these just one more set of numbers among so many others —of illiteracy, poverty, disease?