Of Pets and Women in Mythology 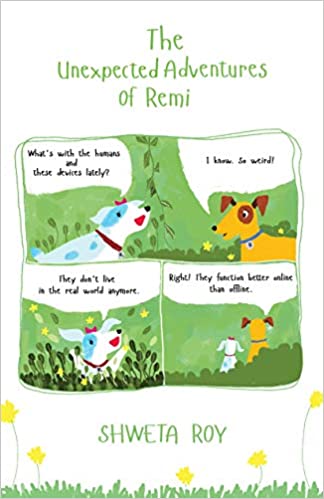 The first book under review has an intriguing cover featuring two dogs who are puzzled by their owners’ addiction to their phones and laptops. One of the dogs, a fox-terrier named Remi wonders, ‘What’s with the humans and these devices lately? … they don’t live in the real world anymore.’ And with that, the reader is drawn into a story narrated from the perspective of a pet animal, their preoccupations and problems, and their attempts to fix the mess created by humans. The story takes the reader from the cosy confines of a pet shop in Chicago to a suburban home, to the online world of pets powered by technology referred to as Fauna Babbles and finally the thrilling world of crime and detection.

Remi discovers early on that being a pet isn’t always a cushy life, for pets are often neglected, ignored and ill-treated by their owners. She decides that pets too have their rights and encourages the ill-used pets of Chicago to come together as a band of Petinists and fight for their rights. A thrilling sequence follows when the pets use the icy cover of a snow weekend to cut off their owners’ access to the internet.