Of Memory and Strife 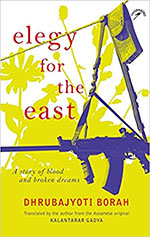 Of Memory and Strife
Ann Susan Aleyas
ELEGY FOR THE EAST: A STORY OF BLOOD AND BROKEN DREAMS by Dhrubajyoti Borah Niyogi Books, 2020, 380 pp., 595.00
Free Review of the Week

Dhrubajyoti Borah’s Elegy for the East: A Story of Blood and Broken Dreams is a poignant narrative set against the backdrop of the insurgency in Assam and the North East in the 1990s. Albeit fictional, the novel offers an insider perspective on the ideology and nature of the armed rebellion led by the United Liberation Front Asom, the subsequent counter-insurgency operations launched by the Indian state, and the tormented lives of common people who are caught between the two. Dhrubajyoti Borah is a well-known name in Assamese literature and was awarded the Sahitya Akademi Award in 2009. The current novel is part of Borah’s prolific Assamese trilogy which includes Tejor Andhar and Arth. The current book is the English translation of the original Assamese titled, Kalantarar Gadya, translated by the author himself.

Elegy for the East begins by introducing the reader to the recent happenings in the middle-class, Bengali-speaking household of Narayan Hazarika. Hazarika’s teenage son, Prabhat unexpectedly starts receiving repeated summons by the Police Intelligence for unofficial interrogations, causing much anxiety and distress to the boy and his family. As police harassment continues, the anxious Hazarika knocks on multiple doors hoping to decipher the Kafkaesque cryptic institutions of state power that act arbitrarily and ruthlessly. It is during one of these attempts that Hazarika meets Partha Choudhury, a young journalist who has been recently appointed as special correspondent for the North East by a renowned New Delhi-based national daily. From here, the novel moves on to many other characters whose lives unfurl in the context of the socio-political turmoil in Assam.

The plot of this novel presents a patchwork of individual stories, much of which is interlinked and developed through the various encounters and experiences of Partha’s journalism. The young journalist, in a sense, becomes the sieve through which multiple perspectives—from that of the absconding rebels to the military and top bureaucratic officers, to local inhabitants—emerge. Partha, however, is by no means an absent presence in the novel; on many occasions, he embodies the narrative conscience as it reflects upon, or even debates, the complex lived experiences of people in Assam at the time.

Journalism is an important trope in Elegy for the East. As a young journalist, Partha finds himself repeatedly thinking about the role of his work as a journalist in a nation fighting an internal war. While on the one hand, the head journalist, Mr Neelratan Choudhury, who has an experience of over twenty years in reporting insurgency in the North East, educates Partha on the importance of objectively distancing oneself from the subject of reporting, Partha cannot help getting personally invested in the many stories he writes about and the people he meets.

He is also acutely aware of the paradox inherent in his journalism in the North East as his reports are intended largely for a reading public in the mainland, whose politics of homogenization has been historically resisted by the former. Further, under-reporting and contortion of reports about the North East are also explored in this narrative. However, the novelistic is an additive to journalism and through its own creative literary resources comments upon the limitations and complexities involved in reporting the unreportable nature of atrocities from the time.

Another gripping engagement of the novel is its re-presentation of the psyche and ideological positions of the underground insurgents. Through Partha’s clandestine interviews and conversations with the insurgents, the reader is invited to take on a disposition of empathy, yet criticality. The rebel leaders are presented as determined to change a political system which reproduces and legitimizes itself through rigged democratic processes. The disillusionment with the failed democratic promises of India as well as the collusion of state apparatus with capitalism forms the bedrock of their revolutionary aspiration to build a separate nation. The narrative, though largely sympathetic to these discontents of the young rebels like Bharat Hazarika and Rondeep Baruah, with Partha occasionally admiring and marvelling at their courage and conviction, nonetheless explores the limitations of the revolutionaries’ method of anarchic violence devoid of mass politics with criticality. Further, the narrative also questions what seems to Partha a utopian dream for a homogenized independent Assamese identity given the diversity of aspirations and multiple ethnic consciousness of people inhabiting the North East. Thus, the practicality and logic of supplanting one supra-national imagination with that of another is deliberated upon. These narrative strands of rational reflexivity are however brilliantly balanced with affective moments of love, loss and fear that haunt the dangerous journey opted by the young revolutionaries.

Further, Dhrubajyoti Borah’s novel also steadily and realistically portrays a disenchantment with the progressive rhetoric of modernity, especially in the lives of the indigenous people. The aforementioned collusion of the state with oil companies and other MNCs in the exploitation of natural resources in the resource-rich North East is only one end of the picture the narrative draws. On the other end, the novel portrays the shattering of the promise of the nation as a benevolent and protective entity through the many incidents of ruthless violence perpetrated by the state and military on the common man. From the early pages of the novel, not only is normalcy rendered provisional in the insurgency-stricken terrains of Assam, but the State soon transforms into a ‘factory of torture’ which perpetrates an atmosphere of suspicion and fear all across. Further, the implementation of the draconian TADA and the suspension of human rights in heavily militarized regions is painfully captured. Memories of bloodshed, rape, betrayal and death which tragically marred the common life in terror-stricken Assam inspire several of the stories in this novel; the nitwit Babula, the young Prabhat, the senile Arjun Volunteer and the widow Sombori, all victims of this violence, find a voice in the Elegy for the East.

Additionally, the novel through its dialogic mode sustains engaging conversations about several ideological positions adopted by its characters. With discussions ranging from Gandhian principles of nonviolence to Marxist philosophy to armed rebellion, the novel is sure to be intellectually engaging to the reader. The novel also takes one through the multiple topographies of Assam, and even allows a peek into some of the beliefs of the indigenous ethnic community of Karbis. This graphic and polyphonic style of narrative closely and realistically captures the nuances of Assamese culture and its politically charged history.

The stark realism of the narrative is however, not all about pains and politics. Unexpected moments of hope emerge in the plot as strands of romance between characters from otherwise socially compartmentalized classes and ways of life bud. In some cases, even though the potential of romantic fulfilment gets tragically suspended in the backdrop of the politics of violence, the novel carries the reader closely through the many textured experiences of the time. True to its title, Elegy for the East is an elegy for broken dreams and the many lives lost in the name of freedom in Assam, even as one witnesses the triumphant parade of history.